Project Tango: Creating the LED Fixture of the Future 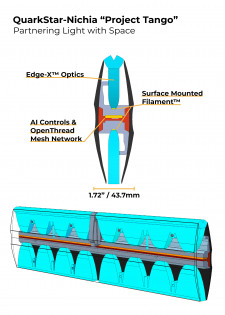 LAS VEGAS, June 9, 2022 (Newswire.com) - QuarkStar, a deep tech startup dedicated to advancements in solid-state lighting, along with its L-Prize® partner Nichia, the world's largest supplier of LEDs, are honored to have their submission "Project Tango" chosen as a winner in the U.S. Department of Energy's L-Prize Phase 1 competition. The results were announced personally by the U.S. Secretary of Energy Jennifer Granholm.

The Department of Energy (DOE) goal in the current three-phase L-Prize competition is to spur groundbreaking innovation in the commercial lighting space, which utilizes as much as 37% of U.S. lighting energy. This ambition is a follow-up to the first L-Prize competition in 2011 that catalyzed the revolutionary market takeover by the LED light bulb.

To win this first phase of the L-Prize, QuarkStar's Project Tango team and Nichia invented a new type of LED package with new components and geometries and coupled it to QuarkStar's 95% efficient Edge-X™ optical system, which provides complete internal color mixing along with unprecedented light distribution and control. To further target DOE's goals of energy savings beyond the luminaire itself, the QuarkStar team also created a new type of AI and self-commissioning networked control system — an open-source system not previously seen in commercial lighting — with an on-board power requirement of only 100 mW per fixture … 50 times less than some of the current most common industry control systems. And it all fits within a svelte two-inch-wide fixture.

This broad range of technological innovation was necessary because the L-Prize requires new levels of performance in both individual components and system design. As stated by the DOE: "Currently available technologies and systems may excel in one performance area, but often at the expense of others … a key innovation of this L-Prize is that a winning system must demonstrate exceptional achievement in all areas."

To realize these ambitions, the QuarkStar team proposed a fundamentally new approach to package design that took advantage of the world-class materials and components of its L-Prize partner Nichia. The resultant simulations were the triple crown of LED engineering: the highest package and system efficacy, the best color quality, and ideal optical distributions and control, with the added bonus of longer lifetimes and chromaticity maintenance.

The QuarkStar-Nichia submission not only met all of DOE's goals but often exceeded them. Examples include easily attaining DOE's stretch goal of best possible color rating of the new TM-30 color rendering metric and a new package architecture that creates a much lower thermal load that will notably extend lumen and chromaticity maintenance and lifetimes. With projected package efficacies of 215 lm/W and higher, these metrics of superior performance are all key differentiators in the LED package market.

This was then integrated with QuarkStar's proven Edge-X optical technology, past winner of DOE's Next Generation Luminaire Award for Emerging Technology. Edge-X's class-defining control of light distributions and uniformity was well demonstrated in its project debut this past year as the primary artificial lighting for the galleries of the largest recent museum project in North America, the Museum of Fine Arts Houston. As one L-Prize judge commented, "The optical design is novel and stands out over today's luminaire systems."

"Although QuarkStar is best known for its award-winning optics technology Edge-X, the L-Prize was the perfect proving ground for highlighting not just the breadth and power of our technologies, but how well they integrate with each other and with the technologies and innovations of outside companies," says Dr. Louis Lerman, QuarkStar's CEO. "It's a genuinely exciting time for innovations in solid-state lighting, with so much more to come."

Says Erik Swenson, VP, Nichia North America, "Since our founding in 1956, Nichia has always been a company focused on material science expertise, with well over a half-a-century of phosphor and well over a quarter-century of semiconductor leadership. We are delighted to work with QuarkStar to push the bounds of achievable performance to the ambitious goals set by DOE."

QuarkStar is a deep tech startup dedicated to advancements in solid‐state lighting. QuarkStar has consistently won industry and government awards for groundbreaking innovations in optics, LED packaging, controls, and integrated systems. Headquartered in Las Vegas, Nevada, QuarkStar's inventors include many pioneers of solid-state lighting, with the majority of its 300 granted patents to date having STEM minority inventors.

Having "Ever Researching for a Brighter World" as a motto, NICHIA takes great pride in being the technology leader and world's largest LED manufacturer. Founded in 1956 as a specialist chemical producer, NICHIA quickly became the leader in luminescent materials (phosphors). Nichia later developed and commercialized the first high brightness blue LED in 1993 and the first white LED in 1996. Additional nitride-based LEDs in various colors were developed, including ultraviolet and visible laser diodes. NICHIA believes that its products will remain at the forefront of energy-efficient solutions throughout the world for years to come. NICHIA will continue to be a company that makes contributions to the world by evolving its original and unique technologies and "Ever Researching for a Brighter World."

About the U.S. Department of Energy (DOE) L-Prize® (Lighting Prize)

Launched by the U.S. Department of Energy (DOE) in May 2021, the L-Prize advances the state of the art in light-emitting diode (LED) lighting. The competition encourages technology developers and researchers to engage in advanced lighting system development leading to groundbreaking designs, products, and impact, with a focus on the commercial lighting sector.

QuarkStar is a deep tech company dedicated to advancements in solid‐state lighting and has consistently won awards for groundbreaking innovations in optics, LED packaging, controls, and integrated systems.