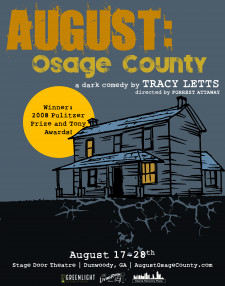 August: Osage County, hailed by the New York Times as "the most exciting new American play Broadway has seen in years" tells the darkly hilarious, deeply touching story of the strong-willed women of the Weston family, whose lives converge when a family crisis brings them back to their Midwest home. With "humor so darkly delicious…you're squirming in your seat even as you're doubled-over laughing" (Variety).

Director Forrest Attaway makes his Atlanta debut. Forrest Attaway, a long-time mentee of the great Edward Albee, is an award-winning director, playwright and actor, whose work in productions of O'Neill's Moon for the Misbegotten and Mamet's American Buffalo won him critical acclaim. The chance to direct Letts' August brings him to Atlanta for the first time. Forrest serves as artistic director for the Kokopelli Theatre, Kansas City, KS.

Giving Back, Going Forward. Greenlight is giving back to those represented by the central themes of August: Osage County. "As someone who's been through recovery myself, I'm able to communicate the need for healing to others." (Producer, Michelle Neil). Dealing with subjects of family trauma, suicide, addiction and mental health, this production will raise money for the Atlanta Recovery Place to aid in addiction recovery and mental health treatment.

Looking to the Future. Greenlight has partnered with The Living Room Theatre (TheLivingRoomKC.com), a non-profit theatrical organization based in Kansas City, KS, which helps aspiring playwrights and creators stage their original works. This partnership will support Atlanta's continued growth as a hub of new, creative works for stage and screen.

Greenlight Acting Studios: Based in Kennesaw, GA, Greenlight is a top training studio for actors, led by working actors, directors and filmmakers who bring real-world experience to the classroom.