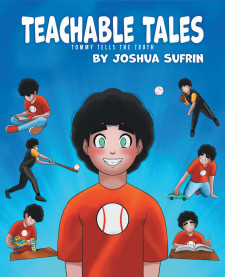 PITTSBURGH, July 22, 2021 (Newswire.com) - Joshua Sufrin, a first-time author from Pittsburgh, Pennsylvania, has completed his most recent book "Teachable Tales: Tommy Tells the Truth": a lovely story of a child who faced the consequences of his lies and eventually learned to set his priorities right and honestly.

Joshua writes, "Teachable Tales: Tommy Tells the Truth brings to life my father's childhood character, Tommy Tells the Truth. My father taught my brother and I from a young age that we had to be honest and not lie. Sometimes, we were scared. Sometimes we hid things from our parents. We learned these valuable lessons young so we would not repeat these behaviors as we were older. This is the story of Tommy. Tommy learns a lesson at an early age that telling the truth can be scary, but it helps being honest. Tommy wants to play sports with his friends like many young children do but did not prioritize his homework and study for a test which ultimately hurt his grades and lost his parent's trust. Tommy was conflicted as to telling his parents about his bad grade, so hiding it in his drawer was what he did. He played ball with his father, while his mother found the grade and later confronted him.

"Tommy wanted to play but ended up getting punished for not telling his parents. Sitting in his room, he realized that he was wrong and went to apologize to his parents. From then on, he was a straight-A student and decided to prioritize his homework over sports and was always honest with his parents. Learning lessons can be hard, but they are valuable at young ages."

Published by Fulton Books, Joshua Sufrin's book gives a meaningful message of honesty and responsibility through the tale of Tommy as he learns from his mistakes.

Readers who wish to experience this delightful work can purchase "Teachable Tales: Tommy Tells the Truth" at bookstores everywhere, or online at the Apple iTunes Store, Amazon, Google Play or Barnes & Noble.

Rebecca Houghton's New Book, 'Gaby and the Big Red Firedog', Is an Amusing Day in the Life of a Dog Drawn to the Firedog's Howl
Fulton Books - Aug 4, 2021

Cheryl J. Corriveau's New Book, 'The Demanding River', Is a Brilliant Account of a Businesswoman Whose Perseverance and Courage Became Her Drive to Triumph
Fulton Books - Aug 4, 2021
Newswire