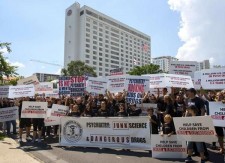 Tampa, Florida, September 29, 2016 (Newswire.com) - Hundreds of members of Citizens Commission on Human Rights (CCHR) Florida held a rally and demonstration September 24 at the Florida Psychiatric Society annual meeting. They were calling  attention to an epidemic destroying the fabric of society—the psychiatric drugging of children.

Some 8 million U.S. children are prescribed psychiatric drugs, more than 1 million under the age of 6. The group protests normal childhood behaviors being “repackaged” and labeled as “mental disorders.”

CCHR states that drugging young children violates the best practice guidelines of the American Academy of Pediatrics as reported by the Centers for Disease Control and Prevention. A national sampling of children ages 4-17 showed children were not receiving treatment called for by their guidelines, but were given psychiatric drugs as a first course of treatment instead.

With the names of numerous pharmaceutical companies that manufacture these drugs appearing on the event’s exhibitor list, including Alkermes, Janssen Pharmaceutical and Sunovion Pharmaceuticals, Inc., the annual meeting appeared to be little more than a way to further solidify the connection between psychiatrists and Big Pharma.

CCHR Florida President Diane Stein led the protest, taking a stand against dangerous psychiatric drugs being given to infants and toddlers despite their known debilitating side effects. “Homicide, suicide and death are reported among older children and adults taking these medications,” she said. “Why is this being done despite the known risks? Because a psychiatrist prescribing drugs can make up to four times as much as one who doesn’t. And drugs prescribed for ADHD alone make billions every year. It is all about the money.”

Downtown St. Petersburg reverberated with the honking of car horns in support of CCHR’s stand on this issue. The group also handed out hundreds of pamphlets to educate passersby on these dangerous practices.

Cofounded in 1969 by the Church of Scientology and renowned psychiatrist emeritus Dr. Thomas Szasz, CCHR is dedicated to eradicating abuses committed under the guise of mental health and enacting patient and consumer protections.