Professor Robert Flome presented video evidence of what he believes is a space alien exploring earth while communicating with two pods, backing up the theory of bacterial life in space. 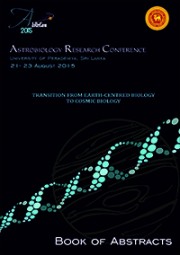 Kandy, Sri Lanka , March 22, 2016 (Newswire.com) - Professor Robert Flome of California recently presented at the Astrobiology Research Conference, held at the University of Peradeniya, in Sri Lanka in August 2015. Professor Flome presented video evidence he captured at his home of what he believes is a space alien exploring earth while communicating with two pods. The evidence, he says, backs up the long-held theory that there is bacterial life in space.

The video was taken by a security camera mounted on an outside balcony where there were no windows nor anything else that could have blocked or reflected the camera's lens. The camera that caught the image has infrared LEDs that make night vision clearer. Infrared lights are produced with wavelengths that range from 8330 to 959 nanometers, which is not visible to the human eye.

Professor Flome said that the discovery of the hovering alien was made by his 10 year-old son, Benji. While the family was eating dinner, Benji was looking at the surveillance camera and noticed a strange looking white object hovering above the ground. Professor Flome stated that as he looked into the surveillance monitor, he knew that the moving object was not from this world.

“In the video, you can see that the alien had goals, motivation, direction and systematic behaviors,” says Professor Flome. “Its sensory capacity appears to be its anterior body part. It appears to have an endoplasm and ectoplasm and possibly gathers food and fluid through its cell membrane.”

Professor Flome notes his discovery is the possible missing link to the Panspermia Theory. In the 1970's, Sir Fred Hoyt and Professor Chandra Wickramasinghe proposed a hypothesis where microbial bacteria from space came to earth and started life. They believed live bacteria was brought to Earth by meteors, comets and asteroids. Dr. Wickramasinghe believed he proved his theory in the 1970’s, and Flome notes that the video evidence he captured supports it.

Professor Flome believes that these extraterrestrials are here now and most likely have been here before. Questions remain about what has become of other microbes in space that have been around for billions of years if microbial bacteria in space came to earth and evolved into humans.

Further research by astrobiologists will be needed to answer these questions. For more information about Professor Flome’s finding, scroll to watch the video and visit ProfessorRobertFlome.com.

Professor Robert Flome captured video evidence at his home of what he believes is alien life visiting Earth. He presented his video at the Astrobiology Research Conference at the University of Peradeniya in Sri Lanka in August 2015. To see the video, visit ProfessorRobertFlome.com.

Company is involved with new scientific discoveries and educational information