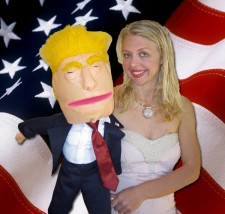 “That other dummy running for President, the orange plastic one, was invited; but not me. I was discriminated against because I am muslin,” says Mr. Tramp.

Donald J. Tramp is a ventriloquist’s dummy that bears a striking resemblance to the GOP Presidential candidate — complete with orange quiff, squinty eyes and outrageous mouth.

The ventriloquist is the petite, Monroe-esque actress-comedienne April Brucker, who launched Mr. Tramp’s presidential bid on April Fools’ Day with a series of YouTube campaign videos.

At the Republican National Convention, Ms. Brucker and Mr. Tramp attracted worldwide media coverage as spokespersons for Stand Together Against Trump, the political action committee that organized the largest anti-Trump protest during the RNC.

“From Jeff Dunham and Walter all the way back to Edgar Bergen and Charlie McCarthy, ventriloquists’ dummies have always gotten away with outrageous remarks,” says Ms. Brucker. “Now there's a presidential candidate who makes professional dummies look like amateurs.”

“From military uniforms to voluptuous miniskirts, muslin made America great; unlike toxic orange plastic that contaminates our political landfill,” says Mr. Tramp. “If one dummy debates, then all dummies should debate; but not Madras dummies who must be vetted.”

“I’m groping to uncover why I was excluded and left with nothing to do other than going furniture shopping with women on the Las Vegas Strip,” adds Mr. Tramp.

According to Ms. Brucker, she has had a lot of fun poking fun at Donald Trump at comedy clubs nationwide, the Hofstra Presidential Debate and even in front of Trump Tower.

“With his outrageous rhetoric, the jokes write themselves. Unfortunately, there’s nothing funny about a demagogue promoting fear, racism, sexism and xenophobia,” says Ms. Brucker.

“I am not only satirizing Donald Trump’s candidacy, but also exposing the clear and present danger that he presents to our nation,” says Ms. Brucker.

“Not to mention to all muslins!” adds Donald J. Tramp.