Gulf Island Shipyards LLC received a contract from Oregon State University for the construction of a Regional Class Research Vessel (RCRV) with an option for two additional vessels. OSU has engaged with naval architecture and engineering firm Glosten to lead the design contract of the next class of ocean-going research vessels for the National Science Foundation (NSF).

Carl Liberty, PDI Managing Member says, “We are extremely thrilled that we have been selected as a supply partner to Gulf Island for this contract.” The RCRV will feature a deployable “Centerboard”, designed and manufactured by PDI that will, with high positional precision, provide a versatile platform on to which a wide variety of acoustical sensors can be easily installed based on specific mission requirements.

These sensors could possibly include fisheries survey transducers (EK-60), current profilers (ADCP), and shallow water multibeam units (2040), among other possibilities. The RCRV's Centerboard will have a removable “foot” that can be used to easily swap out families of sensors and it will have swappable plates that will provide the maximum flexibility for individual sensors. Presently, no vessel in the academic research fleet has one so precisely spatially referenced in order to provide highly reliable data.

These state-of-the-art 193-foot ships will be highly flexible, multi-mission platforms that maximize energy efficient design concepts. The first vessel will be built in Houma, Louisiana, and will be delivered to OSU in the fourth quarter of 2020. This vessel will be ABS Ice-Class C0 and DPS-1, Green-Marine Certified, acoustically quiet, and carry up to 29 crew and embarked scientists.

The first RCRV will be operated by OSU on the West Coast as part of the University-National Oceanographic Laboratory System (UNOLS).

Significance of the Project

Oregon State University has received a grant of $121.88 million from the National Science Foundation to spearhead the construction of a new class of research vessels for the United States Academic Research Fleet. It is the largest grant in the university’s history.

This grant will fund the construction of the first of three planned vessels approved by Congress for research in coastal regions of the continental United States and Alaska. When funding for the next two vessels is authorized, the total grant to OSU could increase to as much as $365 million. The first vessel is slated to be operated by OSU for research missions focusing on the U.S. West Coast. The National Science Foundation will begin the competitive selection of operating institutions for the second and third vessels – likely to universities or consortia for operations on the U.S. East Coast and the Gulf of Mexico.

OSU was selected by the National Science Foundation in 2013 to lead the initial design phase for the new vessels, and to develop and execute a competitive selection for a shipyard in the United States to do the construction. Gulf Island Shipyards, LLC, in Louisiana was chosen and will conduct the detailed design verification over the next year.

“Rising sea levels, ocean acidification, low-oxygen waters or ‘hypoxia,’ declining fisheries, offshore energy, and the threat of catastrophic tsunamis are issues not only in the Pacific Northwest but around the world,” Marinelli said. “These new vessels will provide valuable scientific capacity for better understanding our changing oceans.”

The ships will be equipped to conduct detailed seafloor mapping, to reveal geologic structures important to understanding processes such as subduction zone earthquakes that may trigger tsunamis. The Pacific Northwest is considered a high-risk region because of the Cascadia Subduction Zone, which has produced about two dozen major earthquakes of magnitude 8.0 or greater over the past 10,000 years. The new ships will also be equipped with advanced sensors that will be used to detect and characterize harmful algal blooms, changing ocean chemistry, and the interactions between the sea and atmosphere.

“This class of ships will enable researchers to work much more safely and efficiently at sea because of better handling and stability, more capacity for instrumentation and less noise,” said Clare Reimers, a professor in the College of Earth, Ocean, and Atmospheric Sciences and project co-leader. The design also has numerous ‘green’ features, including an optimized hull form, waste heat recovery, LED lighting, and variable speed power generation. Research vessels play a key role in studying pressing issues facing our oceans, these ships are very forward-looking and are expected to support science operations for 40 years or longer. They will be the most advanced ships of their kind in the country. 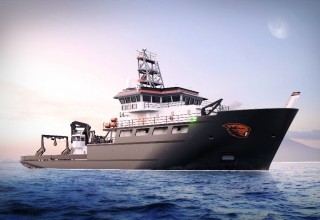 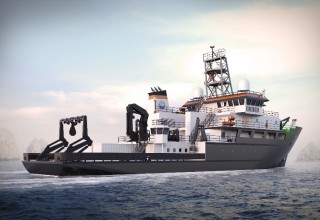