The iOS app version of Positive Singles has recently announced that they have optimised the bottle drift feature so as to bring in better engagement and aid in improved dating ease. They are foreseeing great response for it. 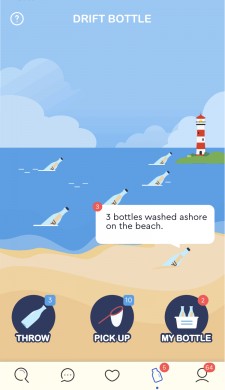 NEW YORK, October 18, 2020 (Newswire.com) - Positive Singles has recently announced that they have brought some changes to their iOS app version. The bottle drift feature that allows the different members to throw bottles that can be opened or closed anonymously as well was a massive hit among users. Given the kind of prolific response this feature got, the team decided to make it even better and thereby brought in some changes.

Free members on the site will be able to send 1 throw and three pickups every day. At the same time, those who chose to have premium membership on the site are entitled to 3 throws and 10 pickups every day. This has been done with the key aim of increasing the effect of floating bottle on the sea. Most users are mighty excited about this change.

Suny Zhang, the CEO of the site was quoted as saying, “At Positive Singles, we believe in incorporating the best features and then improvising them every now and then so as to keep the members hooked. Based on the responses gauging the use of different features, we decided to come up with this new strategy and we are hopeful that things will peak up drastically.”

Those who would like to try out the drift bottle feature and even the ones who would like to opt for paid membership plan and enjoy increased throws and pick up should make it a point to visit https://apps.apple.com/us/app/id1419085637

Positive Singles is one of the top online dating portal that has tons of verified members. The site enjoys whopping success too as several people managed to find their true partner by choosing to register as a member here.