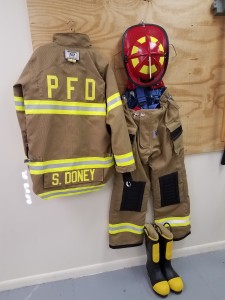 Portsmouth, VA, January 24, 2018 (Newswire.com) - A 2010 study completed by the Centers for Disease Control and Prevention (CDC) and the National Institute for Occupational Safety and Health (NIOSH) revealed that firefighters exhibited greater numbers of cancer diagnoses and cancer-related deaths. The study was completed in late 2015, and indicated that the most prevalent cancers in the 30,000 firefighters studied were digestive, oral, respiratory and urinary cancers. The Portsmouth City Council recently appropriated nearly $360,000 for the Portsmouth Fire Department to purchase a second set of turnout gear for every firefighter. The second set of turnout gear is critical in protecting the health and well-being of the city’s more than 200 firefighters.

According to James Hoffler, chief of the Portsmouth Fire Department, firefighters returning from a recent fire event thoroughly wash and decontaminate their gear. If they get another call, before the gear is completely dry, they risk re-contaminating themselves as residual chemicals can be re-absorbed through the skin. “We are facing a cancer epidemic industry-wide and city council’s investment in the second set turnout gear will help us to greatly reduce the risk to firefighters being exposed to carcinogenic materials,” said Hoffler. “Portsmouth is now one of the few cities in the Hampton Roads region to utilize this type of equipment.” The fire department plans to purchase new second gear suits yearly so that each firefighter will have two suits initially. In the department’s plan, older suits will routinely be replaced.

The CDC and NIOSH study also showed that about twice as many firefighters developed malignant mesothelioma, a rare type of cancer caused by exposure to asbestos. Firefighters are exposed to high levels of carcinogens in fire suppression because homes and business typically have a lot of plastics and other materials that release harmful substances when burning. Having a clean second set of turnout gear available provides an increased level of protection for firefighters so that they do not re-expose themselves to harmful chemicals by reusing a fire protection suit recently worn.

The second set of turnout gear is set to arrive in March.