An artist creates paintings of figures in a new landscape 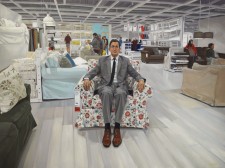 When IKEA opened its 22-acre store in Burbank in February, Niehaus was inspired by the unique mashup of consumerism, comfort and crowds that combine in the retail space, which has come to replace the idea of a public square in her mind. She took photos of her model in classic portrait poses throughout the 50 room settings, and used those photos as the basis for her large-scale oil paintings.

In one piece she chose a chair as an homage to Jean-Auguste-Dominique Ingres’ classic work “Madame Moitessier,” completed in 1856.

“My new work combines aspects of traditional portraiture with this space, which doesn’t immediately lend itself to that,” Niehaus said. “I feel IKEA has become a public space. People already spend a lot of time in retail spaces, but IKEA transcends even that. We eat there. Children play there. And, I buy a lot of my furniture there.”

The cavernous nature of the store lends a science fiction quality to the art and gives it the feel of landscapes as much as portraits. She calls the new series “Swedish Landscapes.”

Although she prefers working with traditional media and subjects, Niehaus finds inspiration in many genres, including medieval and Renaissance art, comics, Golden Age illustration, abstract expressionism and conceptual art. Her strongest influences are the German and British painters of the early to mid-20th century.

Niehaus lives and works at the Brewery, the largest artist complex in the U.S. The Brewery Artwalk will be held 11 a.m. to 6 p.m. Saturday and Sunday, April 29 and 30. The twice-a-year free event allows the artists of to open their studio doors to the public.

Niehaus said her model, filmmaker and fellow Brewery resident Ryan Timmreck, added sensitivity and depth to the portraits with his performance in her images. She noted, though, that she tried to be as unobtrusive as possible while taking the photos at IKEA.

“I don’t want to intrude on the shoppers,” she said. “I want to respect their privacy.”

“I’m amazed at Rikki’s ability to capture something deep in the human soul with her art,” said another Brewery artist Dani Dodge, who recently purchased one of Niehaus’ pieces. “And with this new body of work, Rikki moves beyond portraiture to a new realm, something we haven’t seen in Los Angeles before. It is very exciting.”

To see Niehaus’ studio and her new body of work, visit the Brewery Artwalk or contact her for a private studio visit.

About Rikki Niehaus: Niehaus studied at Art Center College of Design, Otis College of Art and Design and Los Angeles Academy of Figurative Art. She has shown her work in Los Angeles since 2012, including at the LA Fine Art Show, the Pasadena Art Show 2015, CA 101, the Topanga Canyon Juried Open 2015 and Portrait of the Arts District. She won first place and the People’s Choice Award at the Pasadena Art Show 2016.

Rikki Niehaus is a painter living and working at the Brewery, Los Angeles.