POP Plates to Be Featured on the Fox Business Network

Single-handed Tailgating plate is a hit with The Big Pitch panel. The POP Plate is one of six industry innovators featured on the June 18th episode of The Big Pitch, which airs at 4:00 PM EST on the Fox Business Network. 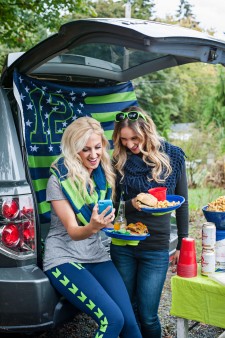 Seattle, WA, June 15, 2016 (Newswire.com) - Tailgating is big business, with American consumers spending billions annually on food, games, apparel, cooking and storage. One of the companies vying for a slice of that pie is the POP Plate, a standout performer at recent The Sports Licensing and Tailgate Show.

"The shoot went well...Cory is an energetic and enthusiastic presenter of your product"

POP PLATE FROM SEATTLE WA IS PROUD TO BE AWARDED BEST NEW PRODUCT OF 2016!

“We like simple, elegant solutions for common problems, and here we have a perfect example,” says Big Pitch panelist Kevin Harrington. “The inserts pop in or out as needed and also telescope to different sizes. You just pop it, lock it and load it.”

Harrington, an original “Shark” on Shark Tank and a direct-to-consumer infomercial pioneer, is one of three panelists on the June 18th episode of The Big Pitch, which was filmed on location last January at the 2016 The Sports Licensing and Tailgate Show in Las Vegas. Thousands of retailers and buyers scour the trade-only event, searching for the next big thing. Many of the products at the show won’t hit store shelves until later this year.

“The Big Pitch is a great way to get a sneak peek at innovative products,” says panelist Brian Hakan. “Our innovation is that you can buy the products as they’re being pitched to us on TV—or anytime thereafter from thebigpitchtv.com web site.”

A limited number of POP Plates will be offered at a special price to viewers of The Big Pitch.

In addition to appearing on the TV Shopping Show, POP Plate will be tapping into The Big Pitch team’s experience in areas ranging from marketing, social media and distribution to sourcing, packaging and product development.

"Be the Change You Want to See."
At RR Creative LLC we love simple, elegant solutions for common problems.