Police Cadets Learn the Rights They Are Sworn to Protect 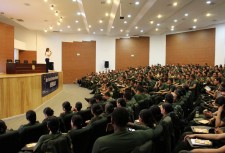 Colombia, June 7, 2016 (Newswire.com) - ​​Police take an oath to protect the peace, freedom and rights of the people they serve. But to do so, they need to understand what this means on a very practical level. And this is particularly true in Colombia—a country where human rights were cast aside by both sides of their bitter and protracted civil war.​

According to Colombia’s National Centre for Historical Memory, some 220,000 people, most of them civilians, died in the conflict between 1958 and 2013. And just between 1985 and 2012, the war forced another five million civilians from their homes.

Youth for Human Rights Colombia is working with police leadership to instill an understanding and appreciation of human rights in police trainees and to see that they grasp it is their responsibility to see that these rights are upheld. They are doing so by conducting educational programs on the United Nations Universal Declaration of Human Rights.

According to Colombia Reports, “indigenous and AfroColombian minorities have been hit hardest by the conflict that’s been waging in Colombia since 1964.”

Most of the AfroColombians, the descendants of African slaves brought by the Spanish colonizers, and more than half the Native American Emberá people, live in the northwest of the country in the department of Chocó. That department also has the lowest standard of living in Colombia.

It was here in the town of Yutro that the Colombia chapter of Youth for Human Rights delivered a seminar to 120 police cadets. They presented a copy of the Youth for Human Rights Educator’s Guide to the commanding officer of the school so these and other police students may be trained in the thirty fundamental rights that form the basis for a democratic society.

Youth for human rights is also working with the military to eradicate the kind human rights abuse that has plagued the nation for nearly 60 years.

Lt. Colonel Anstrongh Polania, Chief of the Department of Joint Operational Law, Ministry of Defense, adopted the Youth for Human Rights curriculum and saw to the training of the entire Colombian Army on the program. Last July, at the grand opening of the Church of Scientology of Bogotá, he described the Youth for Human Rights curriculum as “a program that, in a clear and understandable way, teaches the importance of respecting human rights.” Since implementing this curriculum, the incidence of Army human rights violations dropped by 98 percent.

The Church of Scientology supports Youth for Human Rights. Scientologists on six continents engage in collaborative efforts with government agencies and nongovernmental organizations to bring about broad-scale awareness and implementation of the 1948 United Nations Universal Declaration of Human Rights, the world’s premier human rights document.