48 leading adventurers, including Will Steger, Conrad Anker and Jon Krakauer, release plea for truth and integrity in adventure. 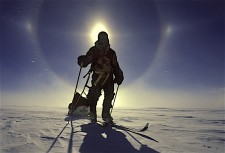 CRESTED BUTTE, Colo., March 2, 2020 (Newswire.com) - 48 of the world’s leading polar explorers, guides and adventurers released a joint statement declaring their support for the recent National Geographic article investigating Colin O’Brady’s lofty claims about his 2018 crossing of a portion of Antarctica. The in-depth article, published on Feb. 3, quoted a variety of experts stating O'Brady misled the media and public about the nature, risk, difficulty, and historical significance of his highly publicized trek.

“O’Brady and his self-promotion were strongly and widely rejected by the polar community,” says Eric Philips, president of the International Polar Guides Association. “We’ve been grappling with how to set the record straight ever since and the National Geographic article aided our efforts and was greatly appreciated.”

In late 2018, Oregon-based adventurer O'Brady completed a 932-mile journey in Antarctica he called “The Impossible First,” also the title of his recent book. While his expedition was a personal success, it did not measure in either scale or scope to those of truly pioneering explorers.

On Feb. 13, O'Brady released a 16-page statement accusing the article of being "widely inaccurate" and demanding National Geographic issue a full retraction. The 48 polar and adventure luminaries signing the following statement, who together have achieved many of the greatest feats in Antarctic exploration history, support the article in its entirety and National Geographic for taking a stand for the integrity of their field and exploration in general.

The declaration is partially inspired by O’Brady's Feb. 20 appearance on the popular Joe Rogan podcast, where his statements further damaged the polar expedition community’s integrity.

“Now more than ever, telling the truth matters,” says Eric Larsen, a noted polar explorer who personally guided O'Brady on a week-long expedition to the North Pole in 2016. "As polar professionals, we want to preserve the integrity of our sport for future generations."

The full version of this press release is here with extended quotes, greater detail on O’Brady’s claims, and images and maps for media use.

Go here for the polar community's declaration of support for the National Geographic article and its statement correcting the record and encouraging an honest, level playing field for adventurers in the future.

Art can be found here and here.