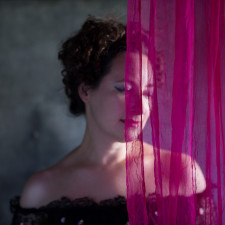 "Passenger" is an engaging merging of poetry & blues that recalls neo-beat stylings and traditions from the 1970s (including The Doors organist Ray Manzarek's work with Michael McLure) that is also freshly embellished with a contemporary voicing. Sage's blues "touchstones" include Eric Burdon and Beth Hart (both with whom she has toured), and John Lee Hooker, who was a close friend in her college years. Featuring NYC-based Billboard-charting poet/producer Rachael Sage & Grammy® nominated cellist Dave Eggar, this track from Poetica's debut brings acclaimed UK blues-rock harmonica player Will Wilde, Spooky Ghost guitarist Gerry Leonard (David Bowie) & Jack Petruzzelli (Joan Osborne) together to weave mesmerizing musical atmospheres around Sage's sensual spoken-word delivery.

Beginning as a duo collaboration under lockdown between Sage and her longtime cellist Dave Eggar (Esperanza Spalding, Duncan Sheik, Corinne Bailey Rae), Poetica soon evolved into a full-blown, cinematic spoken word album, with Sage producing and engineering the project in isolation with limited gear she happened to have with her from being on tour while sending files back and forth to bandmates and guest musicians from every genre; the project was mixed by Grammy® winner Andy Zulla (The Sweet Remains, Stephen Kellogg). From over 200 poems written both during and prior to lockdown, Eggar - whose parents are both poetry professors - volunteered to help Sage select the 18 spoken-word pieces that eventually comprised the album.

Sage explains, "Passenger was one of the most fun tracks to produce on 'Poetica' because I had the opportunity to collaborate with some of my very favorite musicians. I played percussion, and actually sang the bass part note-for-note as a reference track to my engineer/bassist Mikhail Pivovarov, who brought it to life more than I could have ever hoped. I met the great bluesman John Lee Hooker in my college years and we became very good friends. I kinda wish he could hear this piece...I think he would be pleasantly surprised, and also satisfied to hear his eventual influence on me, however unlikely."