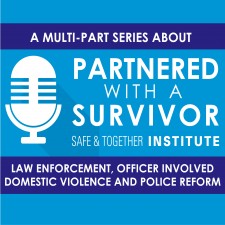 CANTON, Conn., September 28, 2020 (Newswire.com) - ​​To recognize National Domestic Violence Awareness Month in the U.S. for the month of October, “Partnered with a Survivor” (PWAS) podcast is taking on a new topic: police violence and reform. The hosts, David and Ruth Mandel, are part of the international domestic violence-intervention powerhouse, the Safe & Together Institute.

In only six months, the rapidly rising top-10 show in its category has tackled heavy-hitting topics such as coercive control, what children want their abusers to know, what to do if you suspect a family member is being abused and more. Now, they are responding to our current climate of police brutality. Officer-involved domestic violence (OIDV), which primarily refers to police officers’ perpetration of domestic violence, is a serious and prevalent problem. This multi-part series will explore the problem of OIDV through the eyes of an award-winning journalist, an OIDV survivor and reform advocate, an original OIDV researcher, and a decorated police officer who has a 30-year reputation for advocating for changes in domestic violence policing.

“When individual officers choose to abuse their partners and children, it impacts all of us,” said David Mandel, Founder of the Safe & Together Institute and podcast host. “Data suggests that officers who commit domestic violence are more likely to commit excessive force violations. Any efforts to address OIDV also support wider social reforms. It’s critical that we address the hidden global pandemic of officer-involved domestic. This podcast is just one platform.”

While data is limited, more than one study suggests that domestic violence perpetration occurs in police departments at rates of 40 percent or higher. This has implications for the quality of general domestic violence policing, police operational efficiency, and government legal and financial liability. Data also suggests a strong overlap between officers who use excessive force in the community and those who perpetration violence against family members. The International Association of Police Chiefs also has drawn a direct correlation to patterns of behaviors by domestic abusers/child abusers and excessive force and other criminal violations. It is a global problem, evidenced most recently by a complaint against all the police forces in England and Wales.

The multi-part series begins Oct. 1, 2020, and will feature just a few of the following guests:

o   Abusive police officers also have more conflicts with other police on the force. Of male officers who reported being violent toward a fellow officer, 81 percent said they had also behaved violently toward a spouse. MORE.

·       Alex Roslin is an award-winning journalist who was president of the board of the Canadian Centre for Investigative Reporting for the second edition of his book, "Police Wife: The Secret Epidemic of Domestic Violence." MORE.

·       Nanette Chezum, a survivor of a verbally and psychologically abusive relationship with a law enforcement officer, works to educate the public about intimate partner abuse via her personal story. MORE.

·       Mark Wynn, a former law enforcement officer with more than 30 years of experience in domestic violence and addressing OIDV within police forces. MORE.

When OIDV is identified, it is often treated less seriously than other offenses. A 2013 New York Times article found that complaints of domestic violence perpetration by officers resulted in “job loss less often than most other accusations of misconduct.” Victims of OIDV face additional and unique challenges, including risks associated with using the same services offered to mainstream domestic violence survivors, e.g., police officers are often aware of the location of the domestic violence shelters in the area.

The podcast airs on all major platforms or through the PWAS website.