TOKYO, November 22, 2018 (Newswire.com) - What is the Picam360-SurfaceWalker? The Picam360-SurfaceWalker is an unmanned surface vessel that can be operated over extremely long distances, allowing a user to visit far-off places, even from the comfort of the user's own home. A panoramic camera is mounted on the bottom of the drone. A user can watch the video being streamed from this camera in real-time on the smartphone screen, and freely change the viewing angle, all while operating the easy-to-use drone. This means that the user can experience the fun of "remote snorkeling" at the user's convenience, even in places that are difficult to access, and even if the user not a strong swimmer.

OVER 100% FUNDED ON KICKSTARTER

The crowdfunding campaign launched on the world’s largest crowdfunding site “Kickstarter” and it reached 100% of the target of the project on Kickstarter.

In Access Point mode, the SurfaceWalker will allow a user to connect to it directly with a smartphone. What's more, by using it with a USB 3G dongle (which is for connecting to the internet while outdoors), the user can operate the SurfaceWalker from any place where there's an internet connection. As one example of the possibilities, this will allow the user to have fun viewing the beautiful undersea scenery of a far-away place, from the comfort of the user's own home.

With the real-time, 360-degree video from the panoramic camera mounted on the bottom of the drone, a user can watch the action from any angle. The SurfaceWalker's proprietary image compression technology enables streaming at a bandwidth of 300Kbps.

Equipped with a 100W solar panel, it can continue to operate on the power generated during a clear day alone. Will it still work in poor weather conditions? There is concern that the ship won't be able to come home safely. To prevent this, an additional battery can be added to SufaceWalker. Rest assured that it will keep moving even in poor weather.

The SurfaceWalker is equipped with an autonomous navigation feature that allows it to navigate along an assigned route without additional human input, using GPS. When equipped with a camera and measurement devices, it can automatically collect data about what it observes both on the surface of the water and under the water.

Features called OpenCoralMap and OpenCyanoMap ​are currently being developed, which automatically upload underwater images filmed during autonomous navigation and data collected with the drone's measuring devices to a server, and display the collected data on a map.

OUR GOAL IS TO HELP SOLVE ENVIRONMENTAL PROBLEMS​

The ultimate goal of the project in developing the SurfaceWalker is to create a platform to visualize change of natural environment. OpenCyanoMap are currently being developed on a collaborative research project with a university, which creates visualizations of the concentrations of cyanobacteria in lakes. The end goal is to create the conditions that will allow people to gain an accurate understanding of the issue of the decline of coral reefs. The SurfaceWalker project is intended to accomplish this by improving its operability at sea, and by developing OpenCoralMap, a feature that will create visualizations of the extent of coral bleaching, as understood with the use of images filmed by the SurfaceWalker. 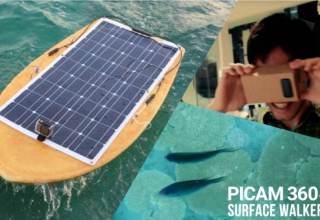 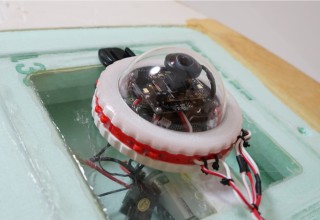 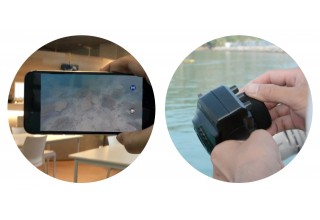 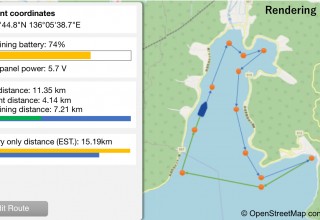