Phoenix home of Scientology founder found to be a "hidden gem" 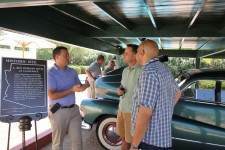 Hosted by the Arizona State Historic Preservation Office, Arizona Preservation Foundation and City of Phoenix at the Crowne Plaza Phoenix Airport Hotel June 8–10, the conference was themed “Preservation Next” and brought together over 250 preservation advocates from around the state to exchange ideas and success stories, share perspectives and solutions to historic preservation issues and foster cooperation between the diverse Arizona preservation communities.

"The L. Ron Hubbard House at Camelback is a hidden gem and is certainly deserving of the many accolades it has received."

The conference culminated with tours of historic sites including the
L. Ron Hubbard House at Camelback. One of only six sites recognized at the national level of significance on the National Register of Historic Places in Phoenix, the L. Ron Hubbard House at Camelback was Hubbard’s home from 1952 to 1954. Following a meticulous restoration as the “Birthplace of the Scientology Religion,” it received a Governor’s Heritage Preservation Honor Award at the 2007 Arizona Historic Preservation Conference.

Among numerous guests was Tempe Historic Preservation Officer John Southard who remarked, “The
L. Ron Hubbard House at Camelback is a hidden gem and is certainly deserving of the many accolades it has received. In addition to allowing visitors a glimpse into early 1950s Valley life, visiting the home provides a thorough start-to-finish overview of how one can go about successfully tackling such a project. I was greatly impressed by the time and effort invested in the restoration work and am very pleased to have had the opportunity to tour the home. The project team’s relentless archival sleuthing and careful examination of on-site physical evidence resulted in a highly detailed restoration of the home and should serve as a road map for future projects of this nature.”

Phoenix historian and co-author of three books on Phoenix history, Donna Reiner, stated “The
L. Ron Hubbard House is a superb example of restoring a historic site to its original state. One takes a step back in time to an era most people only experience from TV programs and is amazed by the detail replicated from photographs. Arizona has attracted a wide range of residents during its rather short history as a state. And a select number of them have contributed to the eclectic history of the United States. L. Ron Hubbard is one of those people and this particular site is where we celebrate the founding of Scientology.”

Additional feedback following a presentation of restoration details came from Arizona Historic Sites Review Committee member Winston Thorne. “The past inspiring the present to reintroduce the past, was a predominant theme at this morning’s open house of the L. Ron Hubbard House at Camelback, part of 2016 Arizona Historic Preservation Conference’s offsite tours.

“Mr. Hubbard, a curious, adventurous, insightful observer of people, places and things, lived in a single-family home in the early 1950’s. Sited at the edge of Phoenix’s periphery back then, it took full advantage of its elevated context as Mr. Hubbard, a larger than life person, did in his time.

“This nationally recognized historic site is exemplary of a well-executed restoration commission. Acquired in 2000, its character-defining features concealed among the hideous additions and alterations over the years, it was slated to be demolished as stated by a local realtor—a fate not destined for this house but a testament of determination and vision from the Friends of L. Ron Hubbard Foundation.

“The L. Ron Hubbard House at Camelback represents a revived moment in time that allows people to engage with Arizona’s past first hand. It is yet another jewel added to our historic heritage which creates a sense of place for residents and visitors alike.”