Phoenix Ancient Art, Hicham Aboutaam and Hercules Are in Mayfair for the PAD London Art Fair 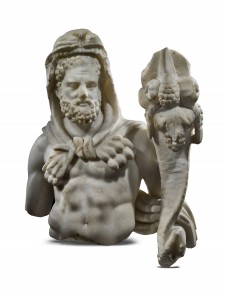 LONDON, October 1, 2018 (Newswire.com) - Phoenix Ancient Art, a perennial crowd favorite at the Pavilian Art + Design fair (PAD), is back for the fifth time (Stand B17). Phoenix will be exhibiting an array of antiquities that span from the ancient worlds of Egypt, Neolithic Europe, imperial Rome, and classical Greece, while PAD convenes in the middle of Mayfair, in Berkeley Square, London from Oct. 1 to 7.

Marble, bronze, glass, gold, wood, and quartzite are the media of choice at the Phoenix Ancient Art stand today. The display is expertly curated with ancient masterworks from different sides of the world positioned harmoniously together to create the perfect visit. One patron said, “it is like visiting all of the antiquities departments of the British Museum at once!”

This great marble sculpture has been residing in the collection of Jan Mitchell in New York since 1966.

One of the highlights Phoenix Ancient Art has brought to PAD is a superb Roman marble bust of Hercules with a cornucopia, (the horn of the River-God Achelous), from the 1st century B.C. – 1st century A.D. “This great marble sculpture has been residing in the collection of Jan Mitchell in New York since 1966. Jan Mitchell was an avid collector with a range of works from paintings, to ancient marbles, to an extensive collection of Pre-columbian gold which was donated to the Metropolitan Museum of Art along with the funds to build the Jan Mitchell Treasury in 1993 located in the South and Central American wing of the museum” says Hicham Aboutaam, president of Electrum, the New York agent for Phoenix Ancient Art. The story of this piece is quite exciting as it depicts Hercules in the stage of his life when he is deified after the twelve labors and moving on to his seat as one of the gods on Olympus. He holds a cornucopia which depicts his trophy after beating off the River-God, Achelous while fighting for Deianira’s hand in marriage. He broke off his horn and filled it with fruit!