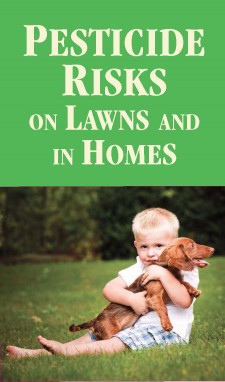 NEW HAVEN, Conn., August 11, 2020 (Newswire.com) - Environment and Human Health, Inc. (EHHI) is an organization of physicians and public health professionals.  EHHI is releasing its pesticide brochure explaining the dangers of pesticide uses, both inside and outside the home.

Most pesticides are inherently toxic, which is why the federal government regulates them. However, just because they are regulated does not guarantee that they are safe. Pesticides are tested for safety one pesticide at a time, yet they are often sold in combinations.

Many pesticides, even though they are government-approved, are carcinogenic, neurotoxic, developmental toxins and endocrine disruptors. The federal government does not have the funding to do all its own pesticide testing, so the government relies on the pesticide industry to test its own pesticide for its safety. This fact remains a problem.

John Wargo, Ph.D., Professor of Environmental Health and Politics at Yale University's School of the Environment said, “Pesticides pose a special threat to the youngest in our population. It is now well-established that pesticide residues easily cross the placenta and expose developing human embryos and fetuses. Pesticides also cross the blood-brain barrier, giving additional evidence that pesticides circulate throughout human tissues.”

Children take in more pesticides relative to their body weight than adults. In addition, their developing organs are more vulnerable to pesticide toxicity. Women who are pregnant should be particularly careful about any pesticide exposure.

Higher pesticide exposure levels happen indoors where the pesticides are often more concentrated. The risk of developing blood cancers such as leukemia and lymphoma increases significantly in children exposed to pesticides indoors, which a recent meta-analysis has shown. A correlation between pesticide exposure and childhood brain tumors has also been observed.

David Brown, Sc.D., Public Health toxicologist, said, “People are routinely exposed to pesticide mixtures every day in the foods and water they consume simply by eating a normal diet. Adding direct pesticide exposures on lawns and in homes increases the risks that pesticide exposures pose.”

Because of these risks, EHHI recommends using organic pest control methods first, and only when those methods fail should pesticides be applied, and then in a way that protects both children and pets.

Pesticide labeling also remains a problem. Labels are only required to address acute toxicity, such as what to do if you swallow the pesticide or get the pesticide in your eyes. The labels' scant warnings are in tiny print, while the benefits of the pesticide are in large type. As well, the labels do not warn about the long-term health effects, such as cancer or neurotoxicity – this, too, is a serious problem.

Nancy Alderman, MES, President of EHHI said, “EPA should require that labels on pesticide packaging be both in English and Spanish. Many pesticide applicators and users of pesticides are Spanish-speaking, and it is critically important that they be able to read clearly the instructions and health warnings on the packaging.”