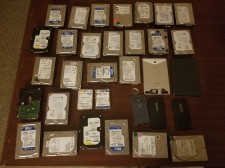 The current state of electronic storage has made it possible for nearly every adult to carry a form of data storage device.  “As data storage is included in nearly every aspect of technology today, so is the likelihood of unauthorized or unintended access to that data,” states CPR Tools CEO, John Benkert. He goes on to say, “Auction, resell, and recycling sites have created a convenient revenue stream in used devices; however, the real value is in the data that the public unintentionally leaves behind.”

While there have been similar studies over the past decade, the NAID study is unique insofar as the recovery process used to locate the data on more than 250 devices was, by design, not sophisticated nor was advanced forensic training required. All methods leveraged downloadable shareware.

Robert Johnson, NAID CEO, points out that while this study’s results show a decrease in data found compared to past studies, “NAID employed only basic measures to extract data; imagine if we had asked our forensics agency to actually dig!” He goes on to surmise that “40 percent is horrifying when you consider the millions of devices that are recycled annually.”

PII recovered included credit card information, contact information, usernames and passwords, company and personal data, tax details, and more. While mobile phones had less recoverable PII at 13%, tablets were disturbingly found with the highest amount at 50%. PII was also found on 44% of hard drives. In total, 40% of the devices yielded PII. The study included devices that had been previously deployed in both commercial and personal environments.

Johnson cautions that the results are in no way an indictment of reputable commercial services providing secure data erasure. “We know by the ongoing audits we conduct of NAID Certified service providers that when overwriting is properly done, it is a trustworthy and effect process. The problem lies with service providers who are not qualified and, too often, with businesses and individuals who feel they can do it themselves,” he said.

The National Association for Information Destruction (NAID) is the international watchdog and non-profit trade association of the secure destruction industry, which currently represents more than 1,900 member locations globally. NAID advocates for a standard of best practices across governments and by service providers as well as suppliers of products, equipment and services to destruction companies. The mission of NAID is to promote the proper destruction of discarded information through education and to encourage the outsourcing of destruction needs to qualified contractors. For more information visit http://www.naidonline.org, or follow us on Twitter and Facebook at @NAIDonline.

The National Association for Information Destruction (NAID) is the international watchdog and non-profit trade association of the secure destruction industry.