The new online Personal Fiduciary Certificate is setting a new tone in the world of fiduciary responsibilities, offering long-overdue fiduciary education for everyone. 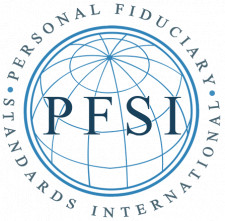 For those in need of a fiduciary, the potential for fraud or abuse can run rampant if left unchecked. PFSI is on a global mission to create the gold standard for guiding individuals appointed to a fiduciary role to act ethically and in the best interest of their appointers.

The Personal Fiduciary Certificate will initially be offered in 12 languages for optimal accessibility. Currently, over 62% of the global population and 74% of internet users worldwide can access and understand the course.

Through the Personal Fiduciary Certificate, individuals will learn:

Financial elder abuse is a widespread problem - one which tends to linger until it is too late. The course was designed to be a constructive solution to this longstanding problem and pave the way for a better future.

In just two hours, the Personal Fiduciary Certificate packs a punch. During the virtual course, students will receive a comprehensive crash course in the ethics, ethical responsibilities, and general duty of care associated with acting as a fiduciary and being in a position of trust over someone else.

"Providing individuals with the guiding principles of fiduciary roles, and the limitation of the authority that's been granted, helps people avoid the mistakes that lead to financial elder abuse, not to mention personal litigation," says PFSI President Mark O'Farrell. "It's like a boating license for personal fiduciaries."

The objective of the Personal Fiduciary Certificate is to create a standardized international understanding of right from wrong to protect seniors from unintended financial abuse by those acting on their behalf. This unique opportunity to protect seniors (and anyone else in need of a fiduciary) from harm is long overdue.

Acting in a fiduciary capacity is a big job, and thanks to the Personal Fiduciary Certificate, fiduciaries do not have to go through it without proper guidance.

PFSI was formed to create a standardized education program for the duty of care required by individuals acting as fiduciaries. Fiduciaries are anyone acting in a position of trust in a financial capacity for the wellbeing of another, such as acting as power of attorney, a trustee, as an executor or executrix, or in other similar capacity. For more information, visit thepfsi.com or email mark.ofarrell@thepfsi.com

Personal Fiduciary Standards International is on a global mission to create the gold standard for guiding individuals appointed to a fiduciary role through the Personal Fiduciary Certificate (PFC). The course is initially being offered in twelve languages, making up over 62% of the global population and more than 74% of internet users worldwide. Providing individuals with the guiding principles of fiduciary roles, and the limitations of authority granted, fosters an environment in which people avoid the perilous mistakes that lead to financial elder abuse. It is a constructive solution to a longstanding and widespread problem.