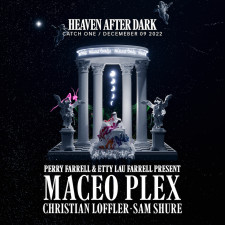 This December performers include: Maceo Plex, the Spanish-based producer who will be returning to Los Angeles for the first time since 2021. Maceo Plex is a long-time admirer of Farrell, having taken inspiration for his own name from the Jane's Addiction song 'My Cat's Name is Maceo'. The two are working on new material, following Maceo's contribution to Farrell's 2021 career solo retrospective 'The Glitz: The Glamour' box set with a remix of Perry Farrell's Kind Heaven Orchestra song, 'Let's All Pray for this World'. German maestro Christian Loffler is returning to Los Angeles for the first time since his sold-out show at 1720 in May of this year. Loffler is an electronic producer whose compositions blur the line between electronic and pop. Sam Shure, the German-based DJ, is making his Los Angeles debut. His latest release on Fabric for Mind Against compilation has taken him on a huge step forward as an emerging artist.

"There really is a heaven. Everybody is smiling, they're singing and dancing, and dress fun and free. You don't need to worry about uniforms in heaven, just wear something that makes it easy to dance," said Perry Farrell.

About Heaven After Dark

Heaven After Dark is an event series created by Perry Farrell and Etty Lau Farrell. It is an event for the next generation of clubs and youth culture featuring iconic artists with emerging musicians and performance art, with the sharpest underground DJs and producers bringing a cultural blend of twisty art for a new generation. It delivers an evening that has to be lived and cannot be viewed on social media. Heaven After Dark brings together unique and eclectic and international culture enthusiasts through music and art. Inspiring an experience for a creative society with special regards for knowledge, diversity, curiosity and collaboration. Visit www.heavenafterdarklive.com.

Influential singer, songwriter, and philanthropist, Perry Farrell, has revolutionized alternative music, underground culture, and modern festivals. The groundbreaking alt-rock band, Jane's Addiction, was Farrell's creative fusion of '70s psychedelia, metal, punk, and proto-grunge; it established the band as the vanguard of what he called "the alternative nation." Currently, Jane's Addiction is on a highly anticipated nationwide tour with The Smashing Pumpkins. Since its inception, Farrell's Kind Heaven Orchestra has become another substantial entity in the industry. Constantly stretching the boundaries of genre and expectations, Farrell's project with his co-creator Etty Lau Farrell is an open-source jam in its own right that has seen collaborations with Peter Hook (Joy Division), Film composer Harry Gregson-Williams, Taylor Hawkins (Foo Fighters), Elliot Easton (The Cars), and legendary David Bowie producer Tony Visconti. In 1991, Farrell founded Lollapalooza, one of the most influential American music festivals since Woodstock. Over the past 31 years, it has continued to lead the modern music scene - not only in Chicago but across the globe in cities such as Sao Paulo, Buenos Aires, Berlin, Paris, Stockholm, and more. Visit www.perryfarrell.com

About Koncept by NXT & INMO

NXT & INMO are two event brands based out of Los Angeles that have been organizing events and experiences in LA for many years. The two companies also have operations in Austin and Mexico and are further expanding their operations into other cities in North America.

Koncept is NXT & INMO's latest venture, an immersive playground beyond your wildest dreams. An experience featuring world-class DJs, performers, cutting-edge production, and some surprises along the way. To learn more, follow https://instagram.com/koncept__la