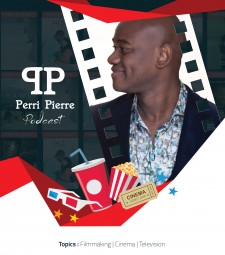 LOS ANGELES, July 28, 2020 (Newswire.com) - Perri Pierre tackles Cinema and Television as a filmmaker and a scholar standpoint in his Podcast, Perri Pierre Podcast.

Perri Pierre Podcast is a young voice that is completely immersed in Cinema, energized, and motivated to keep standards high. Pierre has celebrated all of the recent passionate feedback that has recognized the podcast as something not to miss. "I am beyond excited about my podcast's ongoing success," commented Perri. "As more people learn about it, more subscribe."

Pierre himself is an award-winning filmmaker and actor. Two of Perri's most notable works are the films J-12 and Addiction. In J-12, he plays the role of Vladimir Jean, a young Haitian immigrant residing in New York City who struggles to make ends meet. J-12 won Favorite Short Film at the 2014 Nollywood and African People's Choice Awards (NAFCA). Addiction tells the story of a young man who battles between his addiction to drugs and alcohol and his quest to love. It played in selected theaters in New York City and Los Angeles. And it's been selected by numerous film festivals and won numerous accolades, including a Black Reel Award. Perri has also starred or appeared in many other films across multiple genres showing diversity in his ability.

The actor/filmmaker has a Master of Fine Arts in Cinematic Media Production from Pepperdine University and a Bachelor of Arts in Drama and Theatre from Queens College. Ethnically he is Haitian-American and is active in his community.

For more information, be sure to visit http://www.perripierre.com.