Periods Are Normal. Showing Them Should Be Too 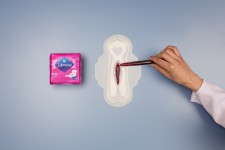 LONDON, October 17, 2017 (Newswire.com) - Leading global feminine care brand Libresse continues its mission to break down period taboos with the launch of #bloodnormal. In a world-first, Libresse launches a global film which features the experience of periods, and period blood, openly and honestly in an attempt to normalise periods in mainstream culture. Libresse identified that periods are largely absent from mainstream culture and is leading the way to add positive period representation to the cultural map.

The #bloodnormal film, created by AMV BBDO, follows a series of young women in real life scenarios, going about their daily lives whilst having their period. The film sensitively portrays the everyday journey whilst women menstruate; demonstrating that periods — in all their forms — are normal and that showing them should be too.

Libresse worked with a selection of female and male collaborators, as well as members of the public, to depict periods in a true to life way. We see French actress Victoire Dauxerre ask a friend for a pad across a dinner party table, we see 12-year-old stand-up comedian Saffron Herndon deliver the punchline "I pulled out a pad and it was like I had my own hall pass" and fashion blogger Julian Hernandez casually buys pads in a convenience store. No big deal. The film ends with a young woman changing her pad in a bathroom; a scene depicting what so many girls and women go through and see every month. It should be such a normal thing. And nothing to be ashamed of. It's just a little blood. Sadly, while the film seeks to project a "normal reality", this world doesn't quite exist yet, which is demonstrated by the restrictions placed on the film.

In a first for a feminine care brand, the typical blue used to denote blood is replaced with a more realistic red to demonstrate a pad's absorbency and crucially blood is shown on women's pads. Shot in a truthful, real style the film beautifully reveals scenarios which aim to educate rather than shock. Each scene provides an insight into how periods are a normal part of everyday life, to convince the audience that showing them should be too.

Tanja Grubner, Global Marketing & Communications Director at Essity, comments: "Periods are a normal part of life, but are largely ignored by mainstream media. They simply don't feature in the representation of female characters that we see every day. As a leader in feminine hygiene, we want to challenge the stigma around periods. We believe that like any other taboo, the more people see it, the more normal the subject becomes. We want to lead the way with a campaign that tackles the taboo head-on by positively showing periods in action in everyday life truthfully and honestly - because we feel it's the right thing to do for society."

The film builds on Libresse's 2016 campaign, Red.fit, which tackled the taboo around the menstrual cycle and exercise. From ballet dancers to boxers, rugby players to runners, the campaign captured the passion, dedication and determination of women who participate in sport all over the world. The film showed how they were not held back by their periods and celebrated blood by portraying it as a symbol of women's strength.

The 2017 #bloodnormal campaign film was shot by award-winning director Daniel Wolfe, who passionately believed in the importance of addressing the topic. He comments, "Periods are still clearly taboo; the more women I chatted to of every age, the more I saw the taboo from a varied demographic. In the weeks running up to the shoot there was a number of interesting articles in the mainstream press challenging the status quo, and numerous pithy social media posts calling for change. 'Can't wait for the day when women no longer pass tampons to a friend like they are a Class A drug' - was a quote which offered particular inspiration. We wanted to create something that provided a platform for discussion rather than trying to tell people what to think. And we hopefully made a film which isn't defined by the gender of its director. A film which both women and men will take something from, hopefully helping instill the idea of a new normal."

A recent survey of 10,000 people found that half of people believed there is a stigma attached to periods, with 9 in 10 women attempting to hide their periods. In a society that is becoming increasingly tolerant, the survey found that over a third of respondents thought periods as taboo over and above mental health problems and the gender pay gap.

Tanja Grubner, continues: "Our ambition is to continue to break down category taboos. Even creating this film has faced period stigmas head on. Currently, we are not able to broadcast this film on television without pixelating an everyday bathroom scene of a woman changing her pad as we have been told by broadcasters that the sight of period blood is deemed unacceptable. We find this shocking given that we are normalized to seeing blood in scenes of violence, yet we are not able to show blood in one of its most natural forms. One day we hope that we live in a society that accepts periods and allows them to be seen in a natural and positive way. We look forward to tackling this important issue for years to come and welcome everyone's opinion using the hashtag #bloodnormal."

French actress Victoire Dauxerre who starred in the #bloodnormal film comments, "I am so passionate about this topic and proud to be part of this campaign; it is speaking to people in an open-minded and true to life way. It shouldn't shock anyone. Periods come every month. They are a part of our life".

12-year-old comedian Saffron Herndon who also appears in the film adds, "I think there's a taboo surrounding periods because there's blood involved and it bloody hurts sometimes. I want people to be able to speak about periods without hesitating. Mainstream culture doesn't reference periods as much as I would like it to. If periods are mentioned, it is usually in a negative way. I'd like to see that changed to a normal way."

Fashion blogger Julian Hernandez says, "When I first heard of the campaign, it sounded like a really unique project raising awareness around an important message. I immediately wanted to get on-board to give a male point of view."

To continue the normalisation of periods in global culture, Libresse will be funding the creation of three short films openly referencing periods. Working with global commissioning platform Flare Studio, who support aspiring creative talent, three emerging filmmakers will each receive a bursary to make their films, each inspired by #bloodnormal.

For more information on #bloodnormal, the survey, the collaborators who appeared in the film Essity please contact charlotte.wood@ketchum.com or alexandra.marsh@ketchum.com +44 207 755 6400.

Essity commissioned an online survey among 10,017 men and women aged 13 to 50 living in the UK, France, Netherlands, Sweden, Russia, Mexico, Argentina, South Africa, China, and Malaysia. Survey interviews took place between 18 April and 9 May 2017. The margin of error for this study is +/- 0.98%. The survey was administered by Bilendi, a global research and survey company.

Essity is a leading global hygiene and health company that develops, produces and sells Personal Care (Baby Care, Feminine Care, Incontinence Products and Medical Solutions), Consumer Tissue and Professional Hygiene products and solutions. Our vision is; Dedicated to improving well-being through leading hygiene and health solutions. Sales are conducted in approximately 150 countries under many strong brands, including the leading global brands TENA and Tork, and other brands, such as Leukoplast, Libero, Libresse, Lotus, Nosotras, Saba, Tempo, Vinda and Zewa. Essity has about 48,000 employees and net sales in 2016 amounted to approximately SEK 101bn (EUR 10.7bn). The business operations are based on a sustainable business model with focus on value creation for people and nature. The company has its headquarters in Stockholm, Sweden, and is listed on Nasdaq Stockholm. Essity used to be part of the SCA Group. More information at www.essity.com.