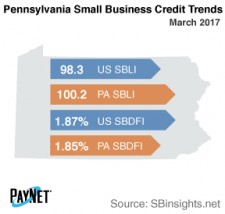 Chicago, IL, May 10, 2017 (Newswire.com) - In March 2017, ﻿small business loan defaults worsened in Pennsylvania﻿, according to data announced by PayNet. Of the 18 major industries, 9 rose and 8﻿ dropped in the state.

At 100.2, the PayNet Small Business Lending Index (SBLI) for Pennsylvania surpassed the national SBLI level (98.3) despite ﻿declining by 0.2% from the previous month's state level. Small business borrowers are being cautious and holding off on new investment.

"Time will tell how these conditions will affect Pennsylvania's economy going forward," says the president of PayNet, William Phelan.