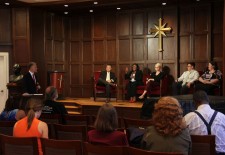 Nashville, TN, November 3, 2016 (Newswire.com) - ​​​Is domestic violence a violation of basic human rights? And what do people need to know to protect their rights and the rights of those they love? These topics were covered at a Peace Day forum organized by United for Human Rights Tennessee and hosted by the Church of Scientology Nashville.​

In 2015, more than 5,000 petitions for orders of protection were filed in Nashville and Davidson County Tennessee.

To focus on human rights and specifically domestic violence as a violation of these rights, United for Human Rights Tennessee chapter brought together experts and community leaders to discuss the issue. The panel was called “Know Your Rights and Survive—Overcoming Domestic Violence.”

They discussed the plight of domestic violence victims and what they can do to seek help.

In August 2015, the Metro Office of Family Safety and Legal Aid Society of Middle Tennessee and the Cumberlands partnered to improve access to free civil legal representation to victims of domestic violence. And in October, the Metro Nashville Police Department and Mayor Megan Barry joined forces to create a new program to assess potential danger and provide services for victims of domestic violence.

An article titled “Human Rights Here and Now,” published by the Human Rights Educators’ Network of Amnesty International, points out that ignorance of human rights are a tremendous liability: “People who do not know their rights are more vulnerable to having them abused and often lack the language and conceptual framework to effectively advocate for them.”

United for Human Rights (UHR) is a nonprofit organization dedicated to raising awareness of human rights. In 2009, UHR released a documentary on the history of human rights. The film begins with a series of man-in-the-street interviews asking one simple question: “What are human rights?” Most people could only name one or two of their human rights, and many were unable to define them at all.

The defense of human rights is a central principle of the Scientology religion. The Code of a Scientologist calls for parishioners “[t]o support true humanitarian endeavors in the fields of human rights.”

The Church of Scientology and Scientologists support United for Human Rights, inspired by the principles expressed by Scientology Founder L. Ron Hubbard, who observed, “It is vital that all thinking men urge upon their governments sweeping reforms in the field of human rights.”