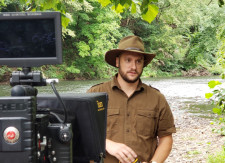 ANNANDALE, N.J., March 18, 2021 (Newswire.com) - Thornton "Thor" Giese had just said "yes" to a cool new job as an Outdoor Educator with New Jersey Fish & Wildlife when COVID-19 hit, and the position was frozen. Undeterred, Thor found a new outlet for his love of science and education, developing his own series of experiential science videos, Thor's Outdoor Science Academy™, which has been picked up by the Emmy-winning Into the Outdoors network, which currently airs on PBS in 27 states, plus Washington, D.C., and Puerto Rico.

Ever since seeing his first Indiana Jones movie as a child, Thor has had a one-track mind to study, understand and appreciate the world around him and his place in it. Now he has the chance to share that passion with others as part of PBS' acclaimed lineup.

"I love to learn, travel and be outdoors. I've not found anything in life to be uninteresting. I am so excited for this opportunity with Into the Outdoors and PBS and for building a program that will entertain and educate people of all ages," said Thor Giese.

With a degree in anthropology from the University of Colorado in Denver, Thor worked as an archaeologist on numerous digs and excavation sites, as well as served as a resident educator at Dinosaur Ridge, an outdoor museum in Colorado known as one of the world's most famous dinosaur fossil localities. Easily educating over 200,000 museum guests in his time, Thor learned how to make science come alive and connect with others.

Thor is entertaining and educating viewers of all ages on our great big world of yesterday, today and tomorrow.

About Into the Outdoors