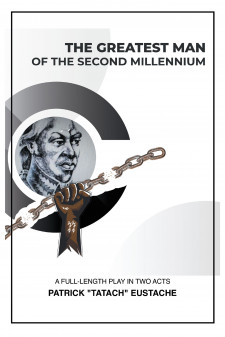 LANHAM, Md., October 21, 2021 (Newswire.com) - Fulton Books author Patrick "Tatach" Eustache, a retired linguist, and an author making his debut as a playwright, has completed his most recent book "The Greatest Man of the Second Millennium": an intriguing script that follows Professor Dessalines longtime dream of centering freedom, especially for the black people, in Vertières. It's about Haiti's amazing contribution to history as it has seen history itself unfold. However, making this dream real may not be as simple as it seems, especially when he encounters characters who could change the trajectory of his life—for good or otherwise, he is still about to see.

Eustache shares, "Professor Dessalines teaches a course on the Haitian Revolution at a US university in the African American Studies Department. Professor Dessalines is also working on his doctoral thesis. His thesis is deeply rooted in an ambitious dream he has been nurturing for years. He wants to make of Vertières, Haiti, a mecca for black people and all freedom-loving people all over the world. Vertières is the site of the greatest battle that ever took place on the American continent. Professor Dessalines aims to make such an important historic battleground better known since Vertières is indeed the cradle of black freedom from slavery. To kick off the project, he plans on taking his students on a pilgrimage to pay tribute to the heroes who successfully defeated Napoleon's army, the strongest army of that era. That revolution marked the beginning of the end for the most brutal and inhumane socioeconomic system ever perpetrated by mankind. Professor Dessalines who is originally from Jamaica, West Indies, is confronting a huge obstacle that could kill his project and destroy his dream. He is experiencing multiple psychotic episodes triggered by racist comments playing in his head. He is entirely convinced that the voice is from no other than a notorious far-right Virginia Beach preacher. The voice is relentlessly and erroneously attributing Haiti's first and only successful slave revolution to a pact the slaves made with the devil in the late 1700s.

Dr. Laveau is a clinical psychologist who is treating Professor Dessalines for his mental health condition. Early in the course of their interactions, Professor Dessalines was able to convince Dr. Laveau she is indeed the reincarnation of Napoleon Bonaparte's notorious sister, Pauline. Dr. Laveau became very obsessed with Pauline Bonaparte through the research she did. Dr. Laveau is fascinated with Pauline Bonaparte, who happens to have a reputation of being one of the greatest sex addicts the world has ever known. In her delusion, she is increasingly living that reputation.

Professor Dessalines is engaged to a woman from Trinidad named Martha, who is Pauline's best friend. The professor hired Dr. Laveau as his therapist at the request of his fiancée, Martha.

Professor Dessalines, with the help of his doctor, tries to overcome his obstacle and concretize his longtime dream. Dr. Laveau finds herself deeper and deeper in need of psychological help.

Published by Fulton Books, Patrick "Tatach" Eustache's book is a great read for history buffs and lovers of drama tied with psychological elements. It's about one man's determination to overcome his mental illness—something that hinders him from accomplishing his dream.

Emphasizing Africans' sacrifices to fight for freedom and justice on Vertières' battleground, the author has written this piece for people to always remember this part of history.

Readers who wish to experience this thrilling work can purchase "The Greatest Man of the Second Millennium" at bookstores everywhere, or online at the Apple iTunes Store, Amazon, Google Play or Barnes & Noble.

Please direct all media inquiries to Author Support via email at support@fultonbooks.com or via telephone at 877-210-0816

Giuseppe Di Loreto's New Book 'Fun With Grandpa' is a Fascinating Collection of Short Stories That Cater to the Innocence of Childhood and Old Age
Fulton Books - Dec 7, 2021

Jennifer Lahr's New Book 'What is Worth?' is a Transformational Read That Aims to Improve One's Outlook and Appreciation of Self
Fulton Books - Dec 7, 2021
Newswire