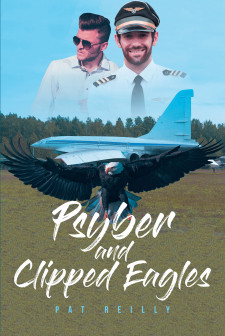 HICKORY CREEK, Texas, January 20, 2022 (Newswire.com) - Fulton Books author Pat Reilly, a former intelligence operative with the U.S. military, a private investigator, broadcaster, and actor based in Nashville, a licensed private pilot, skydiver, and scuba diver, a devout Christian who speaks French and German, has completed his most recent book "Psyber and Clipped Eagles": an engaging read set in the year 2024 where the Earth has met its demise. The Order now holds the highest power in the society but the merciful God won't let darkness rule over His people. This is where David Psyber comes in - a private investigator and ex-spy. He was sent on a mission that will not just guarantee the safety of his family, but the entire human race.

Reilly shares, "The time is the near future. The planet has fallen under the control of the Order, a faceless international cabal that has essentially enslaved the world in an era that Christian believers refer to as the End Times.

"Angels of God, God's secret agents, based in the millennial rule of Christ, travel back in time and recruit human followers of Christ to assist in certain intelligence operations on behalf of the kingdom of God.

"David Psyber, private investigator and ex-spy for the U.S. government, is now employed by C4 Enterprises. Fresh from a politically incorrect diatribe on a Boston radio station, Psyber is sent to the woods of Tennessee, where he and his wife, Lucia Lemieux, set up house on a deserted 737 airliner, the Clipped Eagle, out of the reach of the Order. Shortly after their arrival, Psyber is then sent on a mission by the mysterious Oeltjen, his control, on an operation in Stuttgart, Germany, to neutralize a grave threat to Israel and the world.

"Psyber gradually learns his employment with C4 Enterprises has divine and supernatural connections. International intrigue, quick wit, humor, action, and a confrontation with Satan himself make for a fun ride and, for Psyber, a deeper understanding of the battles to come.

"'Clipped Eagles,' a short story included as part of the ongoing adventures, leads Psyber and his fellow operative, Bull Fisher, into the dark past of a bitter woman."

Published by Fulton Books, Pat Reilly's book is a brilliant work that interweaves science fiction and theology. It is an action-packed read that also reminds everyone of the everlasting love the Creator has for His children.

Delve into the fun, exciting, and spellbinding world of David Psyber and the secret agents of God as they battle against Satan and his minions.

Readers who wish to experience this thrilling work can purchase "Psyber and Clipped Eagles" at bookstores everywhere, or online at the Apple iTunes Store, Amazon, Google Play or Barnes & Noble.

Hannah V. Lander's New Book 'Lost In Love' Is A Riveting Novel About A Woman Whose Search For Truth Cost Her A Heartbreaking Consequence
Fulton Books - May 10, 2022

Paul Rizzo's New Book 'Priestess in a Desert Night' is a Brilliant Fiction About the Tales Under the Desert Moonlight and a Priestess Seeking Salvation
Fulton Books - May 10, 2022

Alex Edelman's New Book 'A Pretty Penny' is an Educational Story That Shapes a Child's Understanding of Their Own Self-Worth
Fulton Books - May 10, 2022