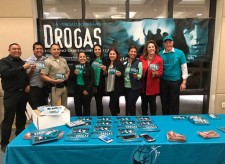 Encinitas, California, December 20, 2016 (Newswire.com) - A record number of Hispanic parents and teens attended the 14th Annual Drug and Alcohol Prevention and Education Conference last month at the Encinitas Senior and Community Center. The program was hosted by Ms. Beatriz Villarreal, winner of the University of San Diego Remarkable Leaders in Education Award and founder of the Mano a Mano Foundation, a program that empowers Latino parents to help their teenage children succeed by steering clear of drugs and gangs.

The annual conference empowers parents to be active in their children’s education and to promote healthy and disciplined lifestyles.

"Every parent at the conference received Truth About Drugs materials, and I told them 'you have gold in your hands. Sit down with your kids, talk about it, watch the videos."

Founder of the Mano a Mano Foundation

It included presentations by officers from the Encinitas Sheriff’s Department, Drug Enforcement Administration, and the California Highway Patrol, on the implications of the passage of California’s marijuana referendum.

The urgency of drug prevention is highlighted by figures released by the San Diego Association of Governments which coordinates 19 local city and county governments in the region: 13% of men and 15% of women arrested in San Diego County in 2014 tested positive for heroin, more than double the rate in 2002.

Some 75-80 percent of the kids in juvenile hall are Latino and drugs are a critical factor Villarreal says. Key to turning this scene around is parental involvement, but she has found that most parents steer clear of the subject because they feel they don’t know enough about drugs to talk to their kids about them.

“If we don’t start educating the parents to teach their kids, we’re never going to stop addiction,” she says.

Villarreal has adopted the Foundation for a Drug-Free World educational materials in her work in the community, and the Foundation’s Truth About Drugs public service announcements and documentary film formed a key component of the conference.

“One mom showed her son the Truth About Drugs materials after he started smoking marijuana and he stopped using drugs,” Villarreal says. “I have several cases like that—the materials are that powerful.”

“My goal with the conference was to provide a sense of what’s going on outside in the community—to really open their eyes and tell them the truth,” says Villarreal. “Every parent at the conference received Truth About Drugs materials, and I told them ‘you have gold in your hands. Sit down with your kids, talk about it, watch the videos. The more informed and the more educated you and your kids are, the less likely they are going to get involved in drugs.’”

With the support of the Church of Scientology, the Foundation for a Drug-Free World makes these award-winning materials available in 17 languages including Spanish. The booklets and videos educate parents and youth on the straight facts so they can make informed decisions to live drug-free.