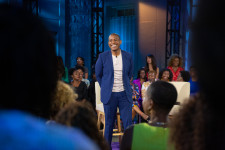 LOS ANGELES, January 28, 2021 (Newswire.com) - OZY Studios, the TV wing of multi-platform media company OZY Media, today announced that 'The Carlos Watson Show,' has been renewed for a third 60-episode season. After recently releasing its 100th episode on YouTube as part of its successful second season, which has garnered over 100 million views and counting and has been dubbed "the fastest-growing talk show in YouTube history," the daily talk show hosted by OZY co-founder and CEO Carlos Watson will launch its third season in March 2021.

Hailed as a unique forum for "insightful, impactful and surprising conversations on everything from Black Lives Matter to love" by the LA Times, the highly-praised premium TV show has earned acclaim for having one of the most diverse lineups of guests in TV history — from Bill Gates to Saweetie, Ta-Nehisi Coates, Lloyd Blankfein, and Priyanka Chopra. Guests already announced for Season Three include Cardi B, Kanye West, Serena Williams, LeBron James, and Meryl Streep.

"We're so excited to be able to continue bringing this groundbreaking conversation show to audiences on YouTube," says OZY's Head of TV, Chris Rantamaki. "The first two seasons resonated with audiences so much, and it's clear Carlos' unique brand of conversation has touched hearts and minds during this turbulent moment in history."

American Family Insurance has agreed to extend their participation into season three, as part of which the Carlos Watson Show will be sharing stories of how various culture-defining public figures have been able to realize their dreams throughout their careers.

"We're so proud to be able to continue to support the exponential success of the Carlos Watson Show, along with our stellar partners who make the show possible," says OZY co-founder and COO Samir Rao. "The confidence that our top-tier partners like American Family Insurance have placed in OZY and in Carlos proves that smart, premium and thoughtful content can and will win the day."

OZY is a next-generation media and entertainment company that aims to help curious people see the world more broadly and more boldly by introducing them to "the New and the Next" — narratives that defy convention, change perspectives, and ignite ideas. Beginning as a digital magazine in 2013, OZY has evolved into a modern media company, featuring award-winning podcasts, 100,000-person festivals, and Emmy-winning TV series with leading networks, including A+E, HISTORY, Lifetime, Amazon, Hulu, OWN, PBS, and BBC. Led by journalist and TV host Carlos Watson and co-founder Samir Rao, OZY is based in Mountain View, California, and backed by leading Silicon Valley investors such as Emerson Collective, Marc Lasry, and Tom Franco. Learn more at OZY.com. Contact pr@ozy.com for press inquiries.

ABOUT THE AMERICAN FAMILY INSURANCE GROUP