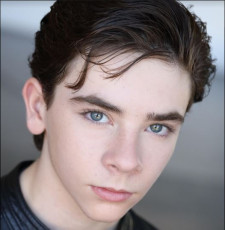 LOS ANGELES, June 21, 2022 (Newswire.com) - Owen Atlas (Little Evil, The Starling) stars in the Rustic Film movie Breathing Happy. The newest film will be releasing on June 24 at the Chattanooga Film Festival and will be virtual, allowing all of Owen's fans to also see this summer flick.

Breathing Happy follows Dylan's journey with substance abuse and his need for redemption, focusing on the one-year anniversary of his sobriety. Owen plays Young Dylan, a troubled youth who is forced to deal with the death of a family member. Owen used the death of his own grandfather to shape his moving portrayal of this complex character. Written and directed by Shane Brady (HBO Ballers), who also plays grown-up Dylan, the film has a phenomenal cast that includes Katelyn Nacon (Walking Dead), Phil Esposito (NHL Hall of Famer), Sarah Bolger (Game of Thrones), Jim O'Heir (Parks and Recreation), John D'Aquino (Cory in the House), as well as an array of other talented actors.

Produced by Emily Zercher, Jamie Parslow, and David Lawson Jr. (The Endless), Breathing Happy was filmed in both Tampa, Florida, and Los Angeles, California, during the trying times of Covid which offered its own set of unique challenges. The set had a smaller crew, and everyone was required to wear masks, only taking them off to shoot the scenes. A smaller SAG budget only allowed two or three takes for each scene meaning Owen's performance had to be on point.

"The best part about playing this character was that I got to do some really dramatic acting…I had to dig deep and use all of my acting skills and I am really proud of my performance. Plus, I got to work with two of my mentors, Shane Brady and John D'Aquino."

Owen is set to shoot a short film this summer and has a couple of other projects in the works that he hasn't been given the greenlight to talk about quite yet. He is represented by Jennifer Millar (Paradigm Talent Agency) and Julie Abrams (Dreamscope Entertainment).