MADISON, N.J., November 10, 2017 (Newswire.com) - The Sisterhood of Salaam Shalom held its 4th Annual Conference this past weekend at Drew University in Madison, New Jersey. The theme of this conference was “Rising up Against Hate.” More than 600 Muslim and Jewish women gathered to learn from the nation’s leading scholars and activists on ways to combat bigotry and hate.

Notable religious scholars like former president of the Islamic Society of North America Dr. Ingrid Matson was one of four keynotes for the event. Matson spoke about her heroes Hajar and Saffiyah and said: “Love doesn’t mean the absence of conflict, it means that despite that conflict, we will work together.” Author of the New York Times best-selling novel The Red Tent and Jewish Keynote Anita Diamant said: "Friendship is as essential as bread and as crucial as chocolate."

We have over a thousand women still on a waiting list and are expanding by the minute. We are not just a group anymore, we are a movement!

A surprise appearance by Senator Corey Booker had the audience up on their feet, empowered by the courage to wage peace.

With several dozen breakout sessions, there was something for everyone. Workshop themes ranged from the action-packed self-defense moves by founding President of the Women's Initiative for Self-Empowerment (WISE) Rana Abdelhamid to the introspective text studies of Director of Multifaith Studies and Initiatives Rabbi Nancy Fuchs Kreimer and Scholar of Islamic Studies Homayra Ziad of the Institute of Islamic, Christian and Jewish studies.

Facilitator Sarah Aptilon of Kansas City conducted a workshop titled “Encountering ‘Us vs. Them’: How to Talk to a Bigot” on how to address those within or outside of our own communities whom we consider to be closed-minded in some way — the server who makes an offhand racist joke, the argumentative friend, the stranger whose comments you overhear at the gym, the relative who makes offensive remarks at the holidays.

Aptilon says, “I was inspired by the experiences that participants shared. They described what had and hadn’t worked for them. Our discussion confirmed that arguing and presenting facts isn’t usually effective, while listening deeply, asking questions and sharing personal stories can work in subtle but powerful ways.”

Professor and co-founder of the Sisterhood Atiya Aftab, Esq., conducted a workshop on “What You Wanted to Know About Judaism and Islam and Were Afraid to Ask” with Rabbi Shira Stern.

Women from over 26 different states and the District of Columbia attended this year’s event with many of them taking to social media to memorialize the event with photos and videos. Manika Patel of Austin, Texas, wrote, “What an amazing weekend I had at the Sisterhood of Salaam Shalom 4th annual conference in Morristown, NJ this weekend. Making new lifelong friends from all across the US, listening to some amazing and inspiring speakers, I can’t wait to see what wonderful things you ladies are going to do in the Sisterhood for 2018.”

Board President Donna Cephas spoke about the power of each of our Sisters to reach many others, to create deep interfaith relationships and to initiate change through waging peace. “Our movement now includes young women leading their own Teenage Chapters.”

The day-long event culminated in a panel discussion moderated by American comedian and host of SiriusXM Progress The Dean Obeidallah Show, the only daily national radio show hosted by a Muslim American. Panelists included author of the recently released Adnan’s Story Rabia Chaudry, founder of Ms. magazine Letty Cottin Pograbin, founding President of the Women's Initiative for Self-Empowerment (WISE) Rana Abdelhamid and the Executive Director of the Sisterhood Sheryl Olitzky.

When asked what was her hope for the future of the organization, Olitzky said: “when we are no longer needed.”

If membership growth is any indication, they are a long way from reaching that goal. The tripling of Sisterhood Chapters and their online communities reflect a burning need to continue this work.

“We have over a thousand women still on a waiting list and are expanding by the minute. We are not just a group anymore, we are a movement!” says Olitzky. 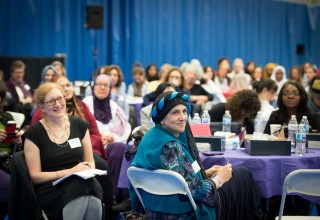 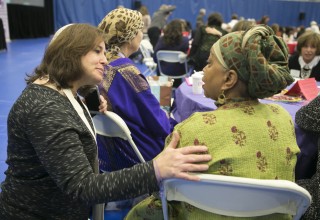 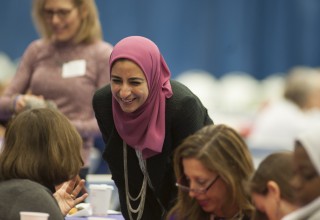 About Sisterhood of Salaam Shalom