Over 50 Percent of Viable Candidates Running for Office in the City of Los Angeles Pledge to Support LA 25x25, a Challenge to Reallocate 25% of Street Space Back to People

The LA 25x25 campaign, started by Streets For All and supported by a coalition of organizations, is a challenge to our next leaders to build a more accessible, greener, healthier and more productive city by giving 25 percent of street space back to people by 2025. The plan includes a massive expansion of Slow Streets, Al Fresco outdoor dining, plazas, green space, bus shelters, tree planting, pedestrian space, and bus and bike lanes.

LOS ANGELES, November 1, 2021 (Newswire.com) - Spearheaded by Streets For All, LA 25x25 is a challenge for those running in the city of Los Angeles for mayor, controller, city attorney, and city council: commit to repurposing 25% of street space by 2025.

"Los Angeles has been stuck in the 1980s in the way we think about our public space," said Michael Schneider, Founder, Streets For All. "25x25 is a chance to fix that and will transform the city into a place where you can visit a park or plaza in under a 10-minute walk, where buses are dramatically faster than cars and you don't have to risk your life to ride a bike, where Slow Streets and Al Fresco are massively expanded, and where we live in a quieter, safer, more vibrant, and more sustainable city."

LA 25x25 details the harm that our addiction to car space has on our city, from one of the highest rates of childhood asthma in the county to a pedestrian being killed every three days, and details solutions that return streets to people.

According to the campaign, for decades, the people of Los Angeles have been forced to accept a "normal" on our streets that is anything but. It is not normal:

"25x25 will make Los Angeles a more affordable, safer, cleaner, greener, and more economically productive city, that's why I was proud to be the first Mayoral Candidate to sign on." - Jessica Lall, candidate for Mayor of Los Angeles

"LA 25x25 envisions a city where the bus is never stuck in traffic and never far away. Where bike share, bike parking, and protected bike lanes are easily accessible to all, so safe that even children could bike themselves to school. Where green space dots every corner of the city. Where those who choose to drive are not stuck in traffic." - Bryn Lindblad, Climate Resolve

As of November 1, the following candidates have signed on:

Candidates wishing to sign on can go to https://la25x25.com.

This initiative is led by Streets For All and based on a concept created by Transportation Alternatives and WXY in New York City, where the proposal has won widespread support, including by Mayor-to-be Eric Adams.

Source: Streets For All

About Streets For All

Streets For All is a local advocacy organization in Los Angeles that is fighting for cleaner air, mobility equity, and a more livable city. Founded in 2019, the group backs candidates running for office that are serious about implementing solutions. 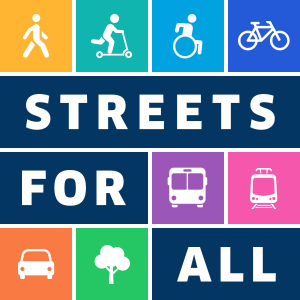 Streets For All Endorses Sarah Kate Levy and Loraine Lundquist for Los Angeles City Council, Releases New Ads
Streets For All, the first political action committee in Los Angeles focused on progressive transportation solutions, announces endorsements and new advertisements leading up to the March 3 election.
Streets For All - Feb 14, 2020