While the invitation came later than expected, Lacey J. Henderson's conviction, faith and hard work have her prepared. 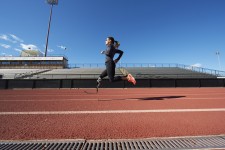 Austin, TX, August 29, 2016 (Newswire.com) - ​​​​​​​​Lacey J. Henderson received the call welcoming her to the US Paralympic track and field team on August 26th – one week before she is to head to Rio for the games. “I'm literally shaking,” she said.

Despite placing first for her long jump at the Paralympic trials earlier this summer, and a title of 2016 National Champion in long jump, team placement percentages were not in her favor, and she was not invited to the national team. Her dream of Rio, which began in 2010, seemed to be cut short.

But Lacey’s heart and determination did not quit. These qualities are what led Ottobock North America to assign her the title of Ambassador. The Ambassador program was designed to place athletes and role models with disabilities at the center of society to demonstrate that sports and performance can restore confidence in life. Lacey, who also spends summers volunteering at a children’s amputee summer camp, is both athlete and role model.

After the disheartening news, she continued her track season. At the Angel City Games event in Los Angeles, CA, she broke the American record for long jump — twice. “3.62 meters is your new American Record. So thankful to finish out the season on a high note,” she shared on her Facebook page.

Little did she know that one month later the International Paralympic Committee would unanimously decide to ban the Russian team for not fulfilling their obligation to comply with the IPC Anti-Doping Code, according to the Paralympic website. The decision resulted in three additional spots for women on the US track and field team. One of which was awarded to Lacey.

Joining 100 Ottobock technicians and support staff from 31 different countries, Lacey will be in good company. Ottobock, who has been the sole technical supplier to the Paralympics since 1988, began sending 15,000 spare parts and 18 tons of equipment to Brazil this summer to prepare for the 2,000+ free repairs that will take place during the event. Ottobock's goal is to take care of the technology so that Paralympians can focus on performance and competition.

The same holds true of Ottobock's support for Lacey. Her story is not based on luck, but on faith, conviction and hard work. Her journey to Rio has just begun, and Ottobock will happily support her to the podium.

Ottobock North America was established in 1958 in Minnesota. Ottobock has 7,000 employees worldwide in 54 branches and produces over 50,000 types of prosthetic and orthotic components, mobility and rehabilitation products.