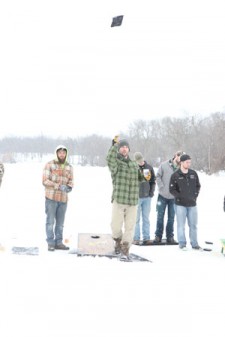 OTTERTAIL, Minn., January 23, 2018 (Newswire.com) - Otter Tail Lakes Country, is at it again. The rural county in west-central Minnesota has received national attention in recent years for their award-winning marketing campaign “Find Your Inner Otter.” But their latest gimmick is “otter” this world. On Feb. 4, while people around the globe gather to watch the most celebrated football game of the year, residents of Otter Tail County will be headed to the lake … a snow-covered frozen lake.

As a kick-off event for the county’s 150th anniversary, Otter Tail County is hosting the world’s largest NFL Championship party … on ice. The two-day extravaganza, coined “OTC on ICE,” is being held on the sprawling 13,725-acre Otter Tail Lake. The festivities kick off Friday, Feb. 2, with a pre-party and familiarization tour where media will be treated to snowmobile rides and ice fishing. The event schedule on Saturday, Feb. 3, is jam-packed - vintage snowmobile rides, ice golf, a Polar Plunge and lots of live music! The itinerary for the NFL Championship on Sunday, Feb. 4 is just as robust. Horse-drawn sleigh rides, a bean bag tournament, more music, and, of course, the biggest party on ice for the biggest game of the year. OTC on ICE will be showing the Big Game on a massive outdoor television screen.

“This isn’t just an event,” said John Edman, director of Explore Minnesota Tourism. “It is a one-of-a-kind celebration that you find #OnlyinMN. Otter Tail County does it again, this time, with a championship football party on Ice.” Otter Tail County is personally inviting well-known Minnesota personalities and other celebrities who have plans to be in Minnesota for the big game. Justin Timberlake, Jimmy Fallon, Andrew Zimmern, Amy Klobuchar … and many more. However, “who” is on the list isn’t nearly as intriguing as “how” they were invited. Ice cream! That’s right, each special guest received an invitation along with a pint of Inner Otter Ice Cream. “Who doesn’t love ice cream?” asked Nick Leonard, Otter Tail County Tourism and Economic Development director.

This is truly a one-of-a-kind experience. “Not everyone can be in U.S. Bank Stadium for the big game,” said Leonard. “Why not join us in Otter Tail County for Minnesota’s second-biggest event that weekend?”

For more information about the event and the media toolkit, visit www.OTConICE.com.