As Chief Medical Officer, Atlanta United FC, OrthoAtlanta orthopedic surgeon, Peter J. Symbas, MD, oversees a consortium of orthopedic and sports medicine physicians that provide medical services as needed to the Atlanta United players, coaches and staff during all home games. Dr. Symbas said, “Soccer has been my passion since youth, driving me to pursue a career in sports medicine. I am extremely proud to serve as the chief medical officer for Atlanta United, coordinating a team of physicians committed to providing the highest level of orthopedic care to its players on the field.” Dr. Symbas is well prepared for this role, having previously served as the team physician for the Atlanta Silverbacks professional soccer team and Pace Academy, a preparatory school in Atlanta. He played competitive soccer at the collegiate level serving as captain of the nationally ranked Emory University men’s soccer team. Dr. Symbas sees patients at OrthoAtlanta offices including Piedmont West, Marietta and Kennesaw. Dr. Symbas is the Chief of Orthopaedics for the Piedmont Clinic. He has also served as the Chairman of the Department of Orthopedics for Piedmont Atlanta Hospital.

As the chief medical officer for Atlanta United, I am proud to be coordinating a team of physicians committed to providing the highest level of orthopedic care to its players on the field.

“Orthopedics and sports medicine expertise is vital to the performance of our players,” said Atlanta United president Darren Eales. “We value the proven sports injury expertise and team leadership that OrthoAtlanta’s Dr. Peter Symbas brings to our soccer club as Chief Medical Officer.”

About OrthoAtlanta
OrthoAtlanta is one of the largest physician-owned orthopedic and sports medicine practices in the greater Atlanta, Georgia area providing an integrated approach to musculoskeletal care. With 39 physicians serving in 14 offices, and 450 employees, the practice is dedicated to providing the highest level of patient care for injury or deformity of muscles, joints, bones, and spine.

About Piedmont Healthcare
A private, not-for-profit organization serving nearly 2 million patients across Georgia, Piedmont is transforming healthcare, creating a destination known for the best clinicians and a one-of-a-kind experience that always puts patients first. Today, more than 110 years since it was founded, Piedmont is known as a leading health system in cancer care, treatment of heart disease and organ transplantation with 11 hospitals, 24 urgent care centers, 28 Piedmont QuickCare locations, 555 Piedmont Clinic physician practice locations and more than 2,000 Piedmont Clinic members. Our 22,000-plus employees dedicate themselves to making a positive difference in every life we touch, and our commitment doesn’t stop there. In FY 2017, Piedmont provided more than $215 million in uncompensated care community benefit programming in an effort to better the health and well-being of the people in the communities we serve. For more information, visit piedmont.org. 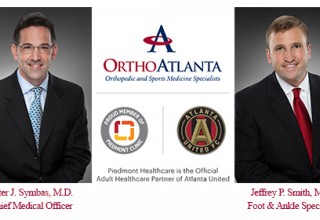