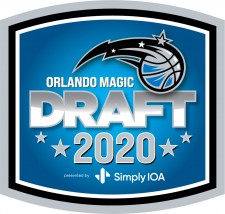 ORLANDO, Fla., October 28, 2020 (Newswire.com) - The Orlando Magic Draft 2020 Presented by SimplyIOA will feature an opportunity for one lucky fan to be the first to meet the Magic's draft pick during the team's virtual press conference through the Magic SimplyIOA Draft Promotion. The winner will receive exclusive access to the team's virtual press conference to introduce its newest Magic member and will also receive the opportunity to ask the pick a question. In addition, the winner will receive a custom Magic prize pack that includes tickets to a game during the 2020-'21 season and an autographed basketball. Fans interested in registering for the promotion (runs Oct. 27-Nov. 13) can visit SimplyIOA.com/Magic and get a home or auto quote in minutes (terms and conditions apply).

Leading up to the Orlando Magic Draft 2020 Presented by SimplyIOA, the team will host a virtual draft preview event on Nov. 11 with Magic Assistant General Manager Matt Lloyd from 5:30 p.m. - 6:30 p.m. The virtual event is open to the public and will include a conversation with Lloyd and Magic broadcasters David Steele, Jeff Turner, Dante Marchitelli and Brian Hill. Lloyd will share an inside look at how the team prepares for the draft and the experts will answer questions live. Fans interested in joining can visit orlandomagic.com/join to register. In addition, live coverage on draft night of the Orlando Magic Draft 2020 Presented by SimplyIOA will be featured on the Magic's social media platforms. Coverage will include guest visits from Magic talent and experts.

Recently, the Magic announced a new, multi-year partnership extension with Insurance Office of America (IOA) as the insurance company joined the franchise as a "Champions of the Community" (COTC) partner. The COTC designation represents an elite tier of brands committed to the local community.

As part of the COTC relationship, IOA featured an in-market promotion which gave 20 fans the opportunity to win a $500 credit to the Magic team shop by completing a quote on SimplyIOA.com/Magic, the company's new consumer facing platform that compares home and auto quotes. In addition, IOA receives social media and radio broadcast assets with the partnership expanding to the Orlando Solar Bears and the Lakeland Magic.

As one of the Magic's six COTC sponsors, the Magic and IOA will continue to work together to positively impact and make a difference in the Central Florida community through support of the Orlando Magic Youth Foundation, the Magic's charitable arm. IOA, founded in Central Florida, and the Magic share a commitment to the community and placing the customer first.