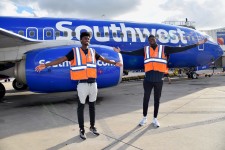 ORLANDO, Fla., December 6, 2019 (Newswire.com) - Most of the stories people share with family and friends after returning to their hometowns following a stay in the City Beautiful are tied to their experiences at Orlando’s theme parks, sporting events and other major Central Florida attractions.

However, some Southwest Airlines passengers traveling to or from Orlando International Airport in November now have another unforgettable and exciting story to reveal.

Orlando Magic players Jonathan Isaac and Mo Bamba – the No. 6 overall NBA Draft picks in 2017 and 2018, respectively – helped create that additional story for incoming and outgoing travelers, as well as those who call Central Florida home. The two 7-footers were at Gate 123 of the Southwest terminal, where they took pictures with fans while assisting Southwest employees with marshalling the aircraft and scanning boarding passes ahead of a flight headed to St. Louis.

“Today was awesome. It was awesome to get just the perspective of what they (Southwest staff) do every day and being able to interact with a bunch of customers getting on the plane and being able to get out there on the runway and just see how everything works,” Isaac said. “This was different. Nothing I’ve done like this, so it was fun. It was definitely a new experience and I love the perspective that we got to get from it. Any time we get to come out and do something with the Magic and with my teammates we have fun.”

Also, at the gate to hand out souvenirs and make the passengers’ trips even more ‘magical’ were STUFF the Magic Mascot, the Magic’s 321 Hype Team, and team Community Ambassador Bo Outlaw.

Bamba, impressed with the number of out-of-town fans that came up to him and wished him and his team the best of luck the rest of the season, had a blast making announcements over the loudspeaker as passengers were getting ready to board.

“This is very different. This is an experience I don’t think I will probably ever necessarily have a chance to do,” he said. “It was really cool.”

Joining forces with the Magic is always special for Southwest, which for the last three years has ranked at the top of J.D. Power’s rankings among low-cost carriers. Being able to team up with another company that greatly values customer service and community outreach is something Southwest is grateful for.

“We love our partnership with the Orlando Magic and we love to take the partnership out of the arena,” said Mackenzie Means, a Business Consultant on the Experiential Marketing and Sponsorships team at Southwest. “It’s a great brand connection between the Magic and Southwest. We are both invested in the communities, specifically here in Orlando. It’s really important for us to be part of the communities that we serve. So, going outside the arena and outside the airport and our two brands working together is a great opportunity every time we have it.”

Since coming to the Magic, Isaac has gone above and beyond to put smiles on people’s faces. His work in the community was recognized last year when he and teammate Aaron Gordon were named co-winners of the Rich & Helen DeVos Community Enrichment Award.

Earlier in the season, the 22-year-old announced he had donated the $25,000 grant money that comes with winning the award to Project Life, an Orlando-based organization that helps individuals and communities around the globe develop their cultural assets and showcase their locally produced creativity. 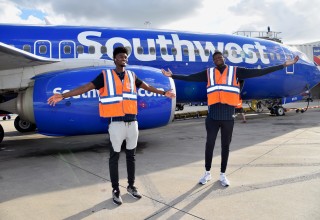 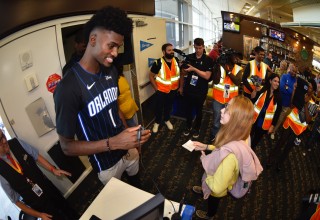 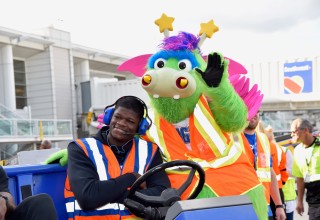 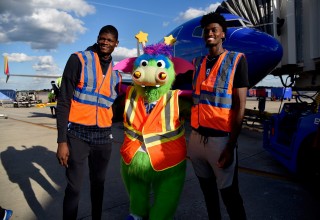