The Baskets for Books program has donated more than 54,000 books to the Early Learning Coalition since program inception 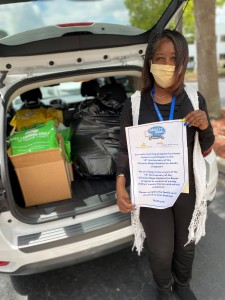 ORLANDO, Fla., October 2, 2020 (Newswire.com) - In an effort to develop lifelong learners through literacy and education, the Orlando Magic and Florida Blue celebrate the 10th anniversary of the Baskets for Books program presented by Florida Blue. For every point made by the Orlando Magic at every home game one book is donated to the Early Learning Coalition (ELC) of Orange County. Since program inception in 2010, more than 54,000 total books have been donated to the Early Learning Coalition. Nearly 4,000 books were donated last season (2019-20) with the help of Houghton Mifflin & Harcourt Publishing Company.

In celebration of the 10th ​anniversary, the Magic and Florida Blue teamed up to create a children's book, STUFF & SUNNY Take Flight, which was distributed virtually over the summer to Orange County Public Schools' (OCPS) elementary school youth, Magic season ticket holders, premium partners and through the Magic's eNews subscribers. The two also donated water bottles to the ELC book recipients.

In addition, over the last three years, the Magic and Florida Blue have participated in Orange County Library System's Summer Reading Program which offered youth ages 6-12 a chance to receive Magic tickets during the upcoming seasons for submitting five book reviews online through the library's reading program. The two also took part in the Orlando Public Library’s Summer Reading Celebration, the culminating event, with Magic Community Ambassadors Nick Anderson and Bo Outlaw joining in the celebration.

The Baskets for Books program provided a way to continue the team’s literacy efforts, one of the Magic’s three focus areas.  Based on the need in this area, literacy remains a point of emphasis for the Magic (research below provided by the U.S. Department of Education).

·         83 percent of the preschool and after-school programs serving at-risk children do not have access to books.

·         By age four, children who live in low-income homes will have heard 32 million fewer words than children who read on a daily basis and have access to books in their home.