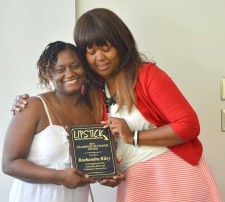 New York City, NY, October 26, 2016 (Newswire.com) - For the second time in a week, LIPSTICK – the urban women’s movement combating gun crime – is featured in People Magazine (http://people.com/crime/rashandra-riley-gun-straw-buying-operation-lipstick/)  People tells the story of LIPSTICK’s own Rashandra Riley, a former honor-roll-student-turned-gunrunner who inspired a group of women in violent-torn neighborhoods to come together to stop their peers from straw purchasing guns. The result was Operation LIPSTICK – Ladies Involved in Putting a Stop to Inner City Killing.

Ms. Riley, a dean’s list college student, was convicted of straw purchasing 40 guns for a friend on campus who could not buy guns himself. LIPSTICK was created in response to Ms. Riley's compelling Congressional testimony (https://youtu.be/i5tYvzDuyqA).​

Experienced offenders have no qualms about using young women to carry, store and even obtain their weapons through straw purchases. This is where LIPSTICK comes in—by educating women, particularly young women, and empowering them to say I'm not going to do the time for your crime. I've seen that social forces like peer pressure can really change people's behavior. I've been a supporter of LIPSTICK from Day One.

Every day, in cities across the country, women like Rashandra. Riley are manipulated and exploited to arm people who can’t get guns legally. Men who cannot pass a criminal background check often turn to women to buy guns for them in what’s known as a “straw purchase.” Straw purchasing by women is a major source of guns used in homicides and other violent crimes in cities throughout the country.

LIPSTICK enlists women like Rashandra to share their stories to warn other women and young girls not to straw purchase, hide, or carry guns for minors or people with criminal records.

“I felt like I was really using my voice on a higher plateau to get something changed,” Riley says.

It’s working. LIPSTICK has been credited with a 33% reduction in gun crimes by women and girls in Boston.

The non-profit has chapters in Boston, New York, and San Francisco. The organization is now raising money through crowd funding to expand to more cities.

Straw purchasing cases involving women underscore the need for LIPSTICK in urban communities throughout the U.S.:

A Chicago man with a criminal record paid a female security guard $800 to buy four guns for him at local gun stores. (http://articles.chicagotribune.com/2013-05-12/news/ct-met-guns-straw-purchasers-20130512_1_kenneth-lee-gun-violence-straw-purchasing​) Research by Northwestern University shows that 15% of guns recovered from male gang members were first bought by women

Last month, a press aide to Philadelphia’s District Attorney was investigated for straw buying an AK-47 for her boyfriend. (http://www.philly.com/philly/news/20160923_DA_s_press_aide_under_investigation.html)

In the largest gun trafficking bust in New York City history, the trafficker used his girlfriend to smuggle and resell weapons. (http://www.nydailynews.com/new-york/largest-seizure-illegal-guns-announced-article-1.1430629)

The handgun used to shoot a Milwaukee police officer was purchased by a woman from The Gander Mountain store. (http://www.wisn.com/article/man-who-shot-officer-had-accomplice-documents-say/6332517)

The 23-year-old wife of convicted trafficker straw purchased six guns in five separate transactions at the same gun store. The guns were used in Minneapolis-area shootings.(http://minnesota.cbslocal.com/2016/03/17/guns-straw-purchase-sentencing/)

A woman bought 35 guns for crack dealer. Several of the guns were found at Oakland crime scenes. (http://www.eastbaytimes.com/2014/10/03/oakland-guns-illegally-purchased-in-oregon-turn-up-at-crime-scenes/)

A woman was arrested for straw purchasing the gun used in a nightclub shooting that killed two youth. (http://www.news-press.com/story/news/crime/2016/07/29/more-victims-identified-club-blu-shooting/87727494/)

LIPSTICK transforms female straw purchasers into leaders, mentors and spokeswomen. They make presentations in beauty salons, community centers, schools, after-school programs, churches, and domestic violence and homeless shelters. They warn women not to be duped into buying, hiding or holding guns for partners and male friends and family members who can’t get guns legally.

“Nobody’s doing what LIPSTICK is doing,” said John Jay College professor of criminal justice David Kennedy. “Their combination of grassroots action and their focus on establishing a community moral imperative against gun trafficking is particularly original and timely.... Women have tremendous moral authority. ”

Boston City Councilor Ayanna Pressley stated, “I’ve have been telling Hillary Clinton, Mayor DeBlasio, Mayor Walsh, and anyone else who will listen, LIPSTICK is the right fix.”

“I’m making a difference when someone who is misguided on what love is, who is willing to go to jail for someone else, makes a turnaround,“ said LIPSTICK Program Director Judy Rose.

LIPSTICK leaders who took part in the story include:

•  Rashandra Riley, former Ohio straw purchaser who testified before Congress and is now a mother with a Master’s degree.  Ms. Riley is seeking to launch LIPSTICK in St. Louis

LIPSTICK is women helping women keep guns out of the wrong hands and create safe neighborhoods where children can grow up without the fear of gunfire.