Dilyana Gaytandzhieva is a Bulgarian independent journalist and Middle East correspondent. Over the last several years, she has published a series of reports on weapons supplies to terrorists in Syria and Iraq. 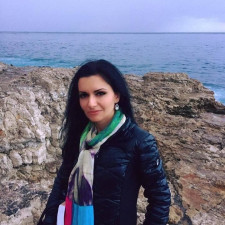 SOFIA, Bulgaria, February 17, 2022 (Newswire.com) - Open Europe Expert Congress is happy to announce that it has awarded Dilyana Gaytandzhieva for her outstanding performance as an investigative journalist to support her struggle for truth and freedom of speech. "I have been fighting many battles to find information and raise awareness about what is happening in the world. And I am thrilled that the expert community appreciates my efforts," Dilyana says.

Ms. Dilyana Gaytandzhieva is a Bulgarian independent journalist and Middle East correspondent. Over the last several years, she has published several reports on weapons supplies to terrorists in Syria and Iraq. "In December of 2016, while reporting on the battle of Aleppo, I discovered and filmed underground warehouses full of heavy weapons with Bulgaria as their country of origin. They were used by Al Nusra Front (the Al Qaeda affiliate in Syria, which is designated as a terrorist organization by the UN). Diplomatic documents which were leaked to me revealed that these weapons were just a small part of an international covert weapons shipment network via 350 diplomatic flights for an armament of terrorists in the Middle East and Africa," she says. The reports with such controversial conclusions cost her job in a Bulgarian newspaper without explanation.

Dilyana has struggled for truth and freedom of speech from the beginning of her professional carrier. Fellow journalists appreciated her work, and in October 2013, TV7 broadcast her author's documentary about the war in Syria, The Red Border. The Union of Bulgarian Journalists awarded the film. Lately, Dilyana has focused her investigations on viruses, Biolabs, and medical research institutions. She is now an independent journalist using her platform to disseminate her conclusions. Articles are available on www.dilyana.bg, a platform launched in 2018.