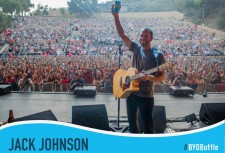 SANTA BARBARA, Calif., January 9, 2020 (Newswire.com) - Oniracom – marketing and technology partner of Sony, Disney, Universal, Warner, Sonos, Deckers, and a host of startups and nonprofits – is proud to announce initial results of its partnership in BYOBottle – an initiative led by multi-platinum recording artist Jack Johnson to significantly reduce plastic pollution in the music industry.

After an Earth Day kickoff, the BYOBottle Campaign signed on over 200 artists – including Maroon 5, P!nk, Wilco, Ben Harper, Empire of the Sun, SWMRS, Flume, CHVRCHES and The Lumineers – as well as 30 venues and festivals; 50 non-profit and business partners; and 800 fans, creating a social media reach of nearly five million.

Oniracom is a web, social, and technology partner on the project, amplifying the BYOBottle commitment to artists and venues globally.

“Our friends at Oniracom supported our planning team with a successful global launch of the BYOBottle campaign,” stated Jack Johnson. “From the creation of a new website to our ongoing reach on social media, their knowledge helped us leverage technology to reach a huge audience around the world and to engage people to take action for the environment.”

“BYOBottle is another example of the Johnson's mission, which we take to heart in all of our work: an individual action, multiplied by millions, creates global change," commented Jacob Tell, Oniracom CEO and Creative Lead. "We're excited to see how our latest Actionable Intelligence™ work can further amplify the impact of sustainability and social-good programs like these by leveraging big data and leading-edge market research."