One of the Oldest Universities in Russia Endorses the 'Computer Game'

HOUSTON & ST. PETERSBURG, Russia, April 17, 2018 (Newswire.com) - "Soft Way to Mozart," created by an American musicologist and head of Houston-based Music Vision International as a scientific breakthrough, presents it at an exhibition of scientific achievements on April 17, 2018, in St. Petersburg.

The Week of Science, April 16-22, will take place at Herzen University, St. Petersburg, Russia. On April 17, within the framework of this event, the university will host the University’s Exhibition of Scientific Achievements.

One of the exhibits of the Music and Computer Technology Department will be a computer system for teaching musical literacy, already used in 60 countries of the world, developed by American musicologist and music educator Hellene Hiner.

Herzen University was the first to endorse this project as one of the 21st century’s most significant scientific discoveries and developments in music education. At present, it is the only higher education institution in the world providing vocational training through professionals’ and students’ classes using this "computer game" as a foundation for music education.

Scientific articles and studies have been written based on the influence of the "Soft Way to Mozart" program on the development of the creative and analytical abilities of beginners. The first of these articles was written by program creator Hellene Hiner in collaboration with Professor Irina Gorbunova of Herzen University and Professor Mikhail Zalivadny of the St. Petersburg Conservatory.

Hiner’s computer program is based on the most important fact in music science: notes and keys are a single visual whole. Relying on this previously unknown fact, the author developed specific formats for presenting notation, which can be adjusted to the visual perception of a beginner of any age, even a toddler. Hiner's program creates various formats for reading texts from elementary ABCs to the standard format used in teaching literature.

The device for accurately measuring initiating, developing and mastering the skills of reading sheet music and playing the piano is an especially important element of the program "Soft Way to Mozart." This measurement tool opens musical pedagogy to the scientific age. The collection of data allows any educator to study in detail the musical aptitude of each person.

"The developed system ‘Soft Way to Mozart’ allows us to combine different forms of spatial expression of music into a single whole, and this is a breakthrough in modern music education," Professor Mikhail Zalivadny says.

"This breakthrough will lead to a completely new round of development of the system of music as art, culture and education," says Professor Gorbunova.

"Famous chemist Mendeleev wrote that science starts with measurements. This is exactly why now we have been able to discover many phenomena in the teaching of music that we did not know before. Through scientific cooperation, we have been associated with Herzen University for many years. I look forward to many years of our joint work, and I believe that, with the help of music, we will be able to change the music world and the world, in general, for the better. The world should become musically literate so that harmony will permanently settle in it," says Hellene Hiner.

We invite all those interested in music education, professionals and amateurs, to visit the exhibition or learn more by visiting the website of “Soft Way to Mozart" project.

About Hellene Hiner: She received her master’s degree in Ukraine and has worked on the new approach to music sight-reading since 1976. The computer component to her method was developed in 2002. Hiner received the U.S. patent in 2009.  As head of the Houston-based company "Music Vision International," she developed Soft Mozart Academy, which provides remote educational services worldwide. The training is conducted in Russian, English, Spanish, French, German and Kazakh. Hiner is the author of the book You Can be a Musician! and a number of enlightening articles for parents and professionals, as well as a number of scientific papers on the program "Soft Mozart."

About Irina Gorbunova: Irina Gorbunova is a Russian scientist, chief researcher and specialist in the educational field of "Musical Computer Technologies’" organizer and head of the Teaching and Methodical Laboratory of Music and Computer Technologies of the Russian State Pedagogical University; chair and the leading Russian expert in the field of application of music and computer technologies in the system of primary, secondary and higher education; jury member of several International, all-Russian and regional competitions in the field of electronic music, as well as in the creation and practical use in the educational process of various training programs and music and computer technologies; doctor of pedagogical sciences; professor; Honored Worker of Higher Professional Education of the Russian Federation.

About Mikhail Zalivadny: Mikhail Sergeevich Zalivadny is a senior research fellow at the St. Petersburg State Conservatory. N. A. Rimsky-Korsakov, Russia, with a Ph.D. in history of arts. 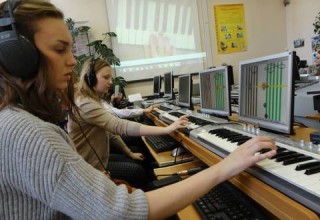