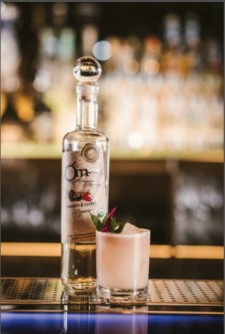 "OM Liqueurs is thrilled to be partnering with Hakkasan Group for this important cause. Our brand has always been aligned with the spirit of giving back, and November is the perfect time to support Keep Memory Alive whose work helps to provide research and treatment for neurodegenerative diseases like Alzheimer's," said Natalie Bovis, Co-founder/CMO of OM Liqueurs.

OM Liqueurs is thrilled to be partnering with Hakkasan Group for this important cause. Our brand has always been aligned with the spirit of giving back, and November is the perfect time to support Keep Memory Alive whose work helps to provide research and treatment for neurodegenerative diseases like Alzheimer's.

"My father has Alzheimer's disease, and so when I left the Lou Ruvo/Keep Memory Alive dinner in Las Vegas last year, I was inspired to do something in my industry to raise money and bring further awareness to the cause during Alzheimer's month. I approached Hakkasan Group with this idea of creating a cocktail at their restaurants where we could donate one dollar per drink sold to the very important work that's being done at the Cleveland Clinic in Las Vegas, and they were on board," said  Jason Monkarsh, Co-founder/CEO of OM Liqueurs.

During the month of November, for every OM Liqueurs cocktail purchased from select Hakkasan Group locations in Las Vegas, one dollar will be donated to Keep Memory Alive. These signature cocktails were created by Hakkasan chief mixologist, Tim Weigel, specifically for this worthy cause.

"We are so excited for this partnership with OM Liqueurs and Keep Memory Alive. Having the opportunity to create such unique cocktails for a great cause has been truly rewarding, and we are happy to be able to do our part in supporting Alzheimer's Awareness Month," said Tim Weigel, chief mixologist of Hakkasan Group.

Hakkasan Group is a worldwide hospitality company with establishments across North America, Europe, Middle East, Asia and Africa. Its namesake is taken from its Michelin star restaurant that set the high-level standard for the group's collection of diverse brands. Its 'brand first' philosophy builds restaurants, nightlife, daylife and soon-to-open hotels, resorts and residences into world-class hospitality brands, all with a focus on service, design, innovation and experience. Its restaurant portfolio includes Hakkasan, with 11 locations worldwide, Ling Ling, Yauatcha, HKK, Sake no Hana, Herringbone, Searsucker and Ivory on Sunset. Under the nightlife/daylife umbrella of brands are Hakkasan Nightclub, Wet Republic, OMNIA and JEWEL Nightclub. Hakkasan Group is fully owned by Alliance International Investments LLC, an investment company based out of Abu Dhabi. For more information visit www.hakkasangroup.com.

Keep Memory Alive, whose mission is to provide enhanced treatment and ultimately cures for patients and their families suffering from neurocognitive disorders, raises awareness and funds in support of the Cleveland Clinic Lou Ruvo Center for Brain Health. By supporting Keep Memory Alive and its fight against neurodegenerative diseases such as Alzheimer's, Huntington's, Parkinson's, ALS and memory disorders of all kinds, we can ensure progress toward better treatments and ultimately cures will occur in Las Vegas. For additional information call (702) 263-9797 or visit keepmemoryalive.org.