The gems chosen for the necklace represent the United States, Japan, and Harrison's judo accomplishments. 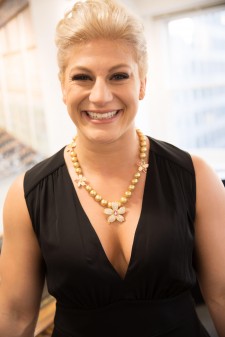 WASHINGTON, August 22, 2017 (Newswire.com) - Two-time Olympic gold medal winner Kayla Harrison will be in Tokyo, Japan the weekend of Aug. 26 and practicing on Aug. 28 at the Kodokan Judo Institute. During her trip, she will be wearing her pearl, diamond, ruby, and sapphire Sakura no mai 桜の舞 necklace to a dinner. The necklace was provided by American fine jeweler "The Intrepid Wendell." Harrison is an official spokesperson for the company.

The necklace features faceted golden South Sea pearls with four jeweled cherry blossoms. The blossoms are made with diamond, ruby, blue sapphire, and colored sapphire. Each stone and color chosen is representative of those symbolizing the United States, the Japanese significance in judo, Harrison's promotion to the red and white belt worn by judo masters, and two golden petals symbolizing Harrison's two gold medals. The large blossom at the front of the necklace symbolizes the dance and skill of the judo master as represented by the sakura, which is the traditional symbol of samurai and judo art.

To request an interview with Kayla Harrison, please contact Roy Englert at wendell@theintrepidwendell.com.

About The Intrepid Wendell

The Intrepid Wendell designs and crafts one-of-a-kind pieces of jewelry for men and women. They work with their customers to create stunning and unique jewelry for any life event of any size or importance. For more information, visit TheIntrepidWendell.com.

About The Intrepid Wendell

We design and craft one-of-a-kind pieces of jewelry for any life event of any size or importance. The Intrepid Wendell is proud to share Kayla Harrison's joy and act as her exclusive provider of fine jewelry and jeweler's services.