Jeremy Reed, Head Hitting Coach for the Los Angeles Angels, has teamed up with the makers of Ollyball to help kids gain early success in hitting and deepen their love for Baseball and Softball. 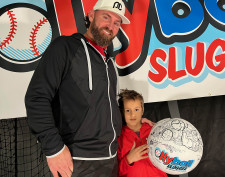 IRVINE, Calif., April 22, 2022 (Newswire.com) - Ollyball, by VICTURY Sports, announces their latest product line extension with the launch of Ollyball SLUGGER. Ollyball was born on a 102-degree Saturday in 2018 when parents Ellen and Joe Burke repeated the age-old saying, "Don't play ball in the house!" That Saturday began their quest to invent a ball kids could safely play with in the house.

One hundred prototypes and two years later, the Burke's invention Ollyball has been awarded two U.S. Patents, a Toy of the Year Award at the New York International Toy Fair, and a slew of other awards, including a Boys' Life Top Toy. As the company approaches one million Ollyballs sold worldwide and over 40M views on TikTok and Instagram, one post of a kid hitting an Ollyball with a baseball bat made its way to Los Angeles Angels Head Hitting Coach Jeremy Reed. Reed is a former Seattle Mariner and named Head Hitting Coach by the Angels in 2018. Based on the success of that post, the Burke's and Jeremy Reed teamed up to expand the company's "full-force indoor play" products  with Ollyball SLUGGER™.

"A lot of parents try to get technical with their kids as they are starting out in baseball. The most important thing is to be athletic, have fun and make contact," said Reed. "We see a lot of hitting devices, but we like the Ollyball Slugger because a first-time hitter can get success by just rolling the ball on the floor and hitting, to full-force hitting indoors and more advanced games such as simulating curveballs and rise balls. The best part about Ollyball Slugger is that kids can get immediate and positive feedback hitting."

About VICTURY Sports
VICTURY Sports introduces Ollyball, a new category of full-force indoor sports and play products. The company was founded by Joseph Burke and his wife Ellen Burke; inventors, founders and parents.

®2022 VICTURY SPORTS, LLC. ALL RIGHTS RESERVED. Angels Baseball LP does not endorse or sponsor Ollyball or other disclaimer to which the parties and Angels Baseball LP agree. 1Ollyball is a winner of a 2019 Toy of the Year at the NY Toy Fair.