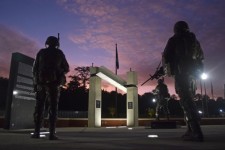 COLUMBUS, Ga., October 11, 2017 (Newswire.com) - The National Infantry Museum in Columbus, Georgia, will hold a dedication of the new Global War on Terrorism Memorial at 11 a.m., Oct. 16, 2017.
The memorial to the Global War on Terrorism includes eight granite panels etched with the names of nearly 7,000 Soldiers, Sailors, Airmen and Marines who have died in service to GWOT since 9/11. A 13-foot steel beam taken from the wreckage of the World Trade Center and donated to the museum by New York City firefighters sits atop concrete columns representing the Twin Towers. The memorial features nine bronze figures representing an Infantry squad, illustrations of each service's role in protecting our nation and narrative panels chronicling the nation's longest war.

The joint-service memorial stands in honor of all service members who have served in the Global War on Terrorism since 9/11 and the families who support them. This includes active duty, veterans and those who've made the ultimate sacrifice defending their country.

The National Infantry Museum is the perfect place for this memorial, and I am confident that the hundreds of thousands of Soldiers, Sailors, Airmen, Marines and family members who visit it will find it to be an emotional, inspirational and fitting tribute to their sacrifices.

The event includes a fundraising dinner the night before the dedication and a private breakfast for Gold Star Families on the day of the ceremony. Patriot Guard Riders will provide honor guards, and will lead a convoy of motorcyclists traveling to the museum.

EVENT DETAILS
The public is invited to the dedication event. Parking at the museum will be limited; please register at www.NationalInfantryMuseum.org/gwot-dedication to receive an emailed parking pass. Those who live or work on Fort Benning are asked to use free shuttle transportation provided at these three pickup points: McGinnis-Wickham Hall East Lot, Brave Rifles Field at Harmony Church and Kannell Field at Sand Hill.

GEN (Ret) John Abizaid will be the guest speaker for the dedication. Abizaid retired from the United States Army after 34 years, earning four stars and becoming the longest-serving commander of United States Central Command. From 2003 to 2007, he was responsible for all military operations and activities in 27 nations in the Arabian Peninsula and the Middle East, the Horn of Africa and Central Asia. Since retiring from the Army in 2007, Abizaid lent his expertise in matters of the Middle East in various consulting capacities. Abizaid and three other four-star generals who served as commanders in Iraq and Afghanistan--Stan McCrystal, George Casey and Chuck Jacoby--joined forces in 2015 to help design the memorial and raise the funds needed to build it. "The National Infantry Museum is the perfect place for this memorial, and I am confident that the hundreds of thousands of Soldiers, Sailors, Airmen, Marines and family members who visit it will find it to be an emotional, inspirational and fitting tribute to their sacrifices," Abizaid said.

Chaplain Yonina Creditor of Camp LeJeune, North Carolina, a Navy rabbi, will host the closing prayer. She was an EMT in New York City at Ground Zero after the attacks of September 11, 2001. The ceremony will close out with Taps and a missing man flyby.

Organizers expect thousands of veterans and active duty military to attend the dedication event, along with top service commanders from each of the branches. Invitations have gone out to Gold Star families across the country. RSVPs have come from as far away as California and Pennsylvania.

ANCILLARY EVENTS
In addition to the Oct. 16 dedication, media are invited to cover the fundraising dinner at 6 p.m., Oct. 15, and the Gold Star breakfast at 9 a.m., Oct. 16. The dinner will feature remarks by two Gold Star family members and Army General (Retired) Barry McCaffrey. The breakfast will give Gold Star families an opportunity to reconnect and reflect in advance of the ceremony. Please contact Cyndy Cerbin at 706-653-9234 to make arrangements well in advance of the event.

The Museum, normally closed on Mondays, will open at noon on Oct. 16 and remain open until 5 p.m.

Gold Star mom Debbie Tuttle, inspired by her son's sacrifice to find new purpose in life, is driving 2,500 miles across the country in "Keith's Tribute Truck" to honor him at the dedication.

Lt. Yonina Creditor, a Navy rabbi giving the closing prayer at the dedication, was an EMT at Ground Zero after the attacks on 9/11.

New York City Fire Department Chief James Leonard, who has been with FDNY 38 years, will be attending the dedication.

Nick Loudon was serving in Afghanistan at the same time his brother Chris was serving in Iraq. In 2008, Chris and three others were killed when an IED exploded near their vehicle. It was Nick's duty to accompany his brother's body home. Nick will be attending the dedication.

Alan Cottrill of Zanesville, Ohio, was commissioned to create the statues of the nine Infantrymen that are part of the memorial.

Dignitaries available for interviews include:

For more specifics about the day's events, click here.

MEMORIAL DETAILS
The memorial includes elements that reference the attacks of September 11, 2001, which triggered the Global War on Terrorism, and our response to them. At the front are two concrete pillars representing the Twin Towers. Bridging the pillars is a 13-foot steel beam that was pulled from the wreckage of the North Tower and given to the museum by New York City firefighters. The beam is attached to each pillar at different heights representing where each was struck by the terrorist-operated aircraft. The North Tower was struck between floors 93 and 99 by hijacked American Airlines Flight 11. The South Tower was struck between floors 78 and 84 by United Airlines Flight 175.

In the center of the memorial is a five-sided platform paying tribute to those who were killed in the Pentagon. Atop the platform is a bronze figure of SPC Ross McGinnis, a Medal of Honor recipient.

The McGinnis statue represents the leader of the nine-person Infantry team. Flanking the statue are the other eight members of an Infantry Squad, collectively representing the cornerstone of American military might. Each is outfitted in uniforms and equipment in use by the Army upon deployment.

About the National Infantry Museum | Located in Columbus, Georgia, about 90 minutes south of Atlanta off I-185, the 190,000-square-foot National Infantry Museum opened in June 2009 on a 155-acre tract of hardwoods and pines. It is the first world-class Museum to pay tribute to the U.S. Army Infantryman and those who fight alongside him. It was voted the "#1 Free Museum in America" in the 2016 USA Today Readers' Choice Awards and was included in CNN's "12 of the best military museums around the world." It is located just outside the gates of Fort Benning's Maneuver Center of Excellence which is one of the Army's largest installations and the home of the Infantry. The National Infantry Museum emphasizes the values that define the Infantryman, as well as the nation he protects: Loyalty, Duty, Respect, Selfless Service, Honor, Integrity and Personal Courage. It preserves and displays one of the greatest collections of military artifacts in the world, and offers interactive opportunities including a Giant Screen Theater, combat simulators and an on-site restaurant and gift shop, a parade field, memorial walk of honor, authentic World War II Company Street, and Vietnam Memorial Plaza, as well as year-round special events including Flag Retirement Ceremonies, Paver Dedication Ceremonies, the annual Fourth of July celebration, graduations and living history demonstrations. 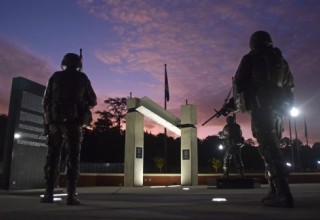 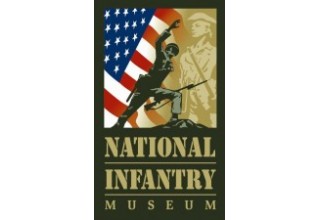 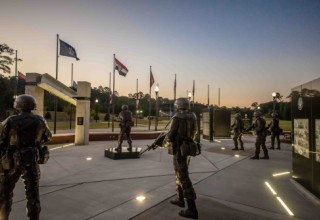