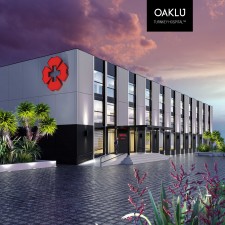 EDMONTON, Alberta, June 30, 2020 (Newswire.com) - Morgan Reynolds, President of Oaklu, announced today that he has appointed Allen Kay, creator of “If you see something say something” and many other well-known advertising campaigns, as Creative Advisor, in addition to Rich Lofgren – advisor to Kevin Harrington of the original Shark Tank – as Technical Advisor.

Allen Kay, CEO of The Advertising Company in New York City, and Richard Lofgren, who works with Allen on special projects, have been working with Mr. Reynolds on the branding of Turnkey Hospital – creating a new category in global construction.

The idea was conceived and developed by Mr. Reynolds and branded “Turnkey Hospital” by Mr.Kay,

“Oaklu is delighted and very proud to have both Allen Kay and Richard Lofgren on board,” said Morgan Reynolds, President of Oaklu.

About Oaklu: With offices in Toronto, San Francisco, Vancouver and Edmonton, Oaklu is a fast-growing, global, large-scale developer. The firm is known for its well-designed, high-quality residential, commercial and public structures. It is currently developing two large-scale projects, “Ember Gold,” a unique collection of architectural icons, and accepting contracts to build self-contained, ready-to-move-in Turnkey Hospital™ installations in several countries. A new category originated by the company. Oaklu is finalizing plans to build hundreds of Turnkey Hospital units in the U.S. and underserved nations around the world.

About The Advertising Company: Founded by Allen Kay in January 2014, The Advertising Company has been positioning and creating effective advertising for large, medium, and small companies ever since. Having worked closely for many years with clients such as Xerox, Virgin Atlantic, Honda, Turner Broadcasting, Comedy central, Wynn Resorts, the MTA, The Port Authority of NY & NJ, and many more, Allen’s Iconic branding has helped make them household names. Microsite: AllenKay.Us.

About Richard Lofgren: Along with being advisor to Shark Tank’s Kevin Harrington, Mr. Lofgren has extensive experience advising leading companies in the medical equipment and energy sectors. He has worked with global corporations and public organizations including Bechtel, Stone & Webster and the U.S Department of Energy.