In 30 years at DMV, Owen McShane has focused on auto theft, fraud detection and identity theft 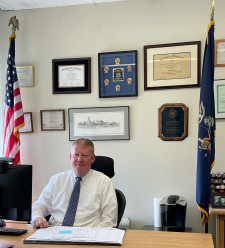 ALBANY, N.Y., September 9, 2021 (Newswire.com) - Owen McShane, The New York Anti Car Theft and Fraud Association Board of Director and Director of Field Investigations for the New York State Department of Motor Vehicles, is the recipient of the 2021 Lifetime Achievement in Highway Safety Award from the American Association of Motor Vehicle Administrators (AAMVA).

"Owen McShane is one of our most valued members on the NYACT Board of Directors," said Nichole Soriano, NYACT Chair. "If his hard work and dedication on our Board is of any indication, this outstanding recognition couldn't be more well-deserved."

McShane has been conducting training for NYACT since 1994 and was elected to the Board in 2000. Soriano added, "NYACT's members have greatly benefited from his expertise and knowledge of auto theft and fraud. His resourcefulness in providing training himself, as well as bringing top speakers to our events to educate law enforcement and insurance investigators has been extremely effective. This honor recognizes his many years of commitment to combating fraud, and we appreciate his work at NYS DMV and with us at NYACT."

The Division of Field Investigation is the criminal investigative branch of DMV and consists of 140 employees including 100 sworn investigators. The primary mission of the division is to conduct investigations related to auto theft, identity theft, odometer fraud and the use of fraudulent or altered documents.

When first hired by DMV as an investigator, McShane was assigned to address a surge of auto thefts in New York City. At the time, some 140,000 cars a year were being stolen. In 2019, the most recent year for which data is available, that number had been reduced to 7,000 a year.

A DMV Director since 2003, McShane began his career with the agency as an Investigator in 1991. During his tenure, McShane has held every investigative position in the unit, from entry-level investigator, senior investigator, regional supervisor to chief investigator and finally director.

"I like making a difference, and I feel like we provide an extra layer of protection to the citizens of New York," McShane said.

NYACT was established in 1978 and is an umbrella organization supported by members that include most insurance companies licensed in New York, a broad spectrum of government and regulatory agencies that lend their support to our efforts.